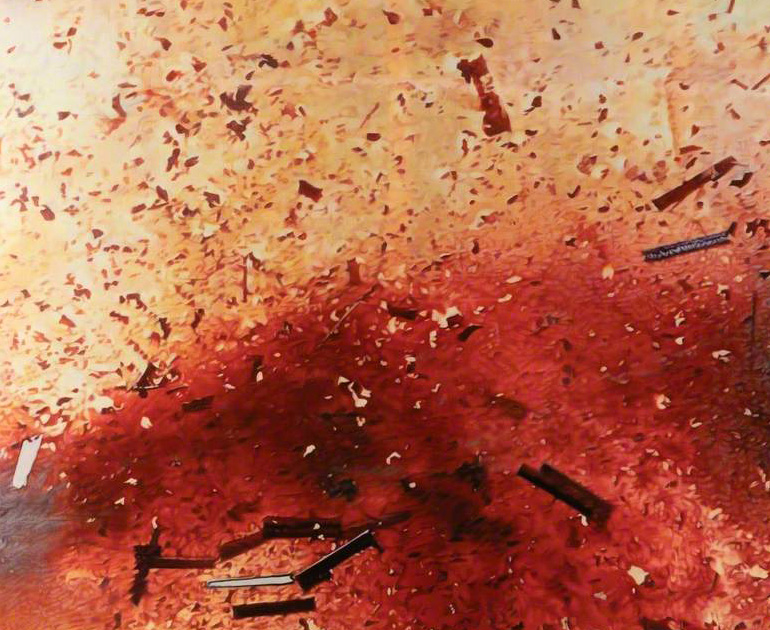 Walter Richard Sickert’s frank drawings of urban life in the early twentieth century seemingly have little in common with Diane Ibbotson’s hyper-realistic paintings of a coastal path. One focuses on the realities of working-class experience while the other paints meticulously detailed snapshots from her life.

However, both styles come under the umbrella of realism. From the mid-19th century to the early-20th century realism was characterised by the honest painting of subjects from ordinary life. It moved against previously dominant forms of art, such as Romanticism and history painting.

Realism also refers to a hyper-realistic style where any subject is painted in sharp focus. This second definition evolved into photo-realism in the 1960s. Inspired by the ever-increasing presence of photography, photorealists wanted to break down ideas of what was an ‘appropriate’ artistic subject.

Fitting the earlier definition of realism, Sickert found inspiration from the grittiness of everyday urban life. He believed that the greatest form of art featured the human figure, and in particular the female nude. However, Sickert portrayed them with “unflinching objectivity,” rather than the idealised classical style.

He preferred to show real working-class women on cheap iron bed frames in Camden’s lodging rooms. Upper- and middle-class art audiences were shocked by the bluntness of these realistic scenes as they were used to more elevated subjects. By choosing to draw these ‘ordinary’ people, however, Sickert showed they were worthy artistic subjects, rather than separate from conventional art.

While the subject of Ibbotson’s paintings are almost the opposite of Sickert’s, the message is similar. The detail in their artworks, and the time and energy spent creating them, turn ‘commonplace’ sights into something miraculous and special.

Sickert represented life through working-class people and urban environments. Alternatively, Ibbotson zooms in to look at the textures and foundations of her daily experience. Back to the Garden: Stardust (Figure 2) and Back to the Garden: Starshine (Figure 3) were painted from photographs taken on a coastal walking path in Falmouth, Cornwall. They represent the elements of earth and water.

‘Back to the Garden,’ the title of both paintings, refers to Joni Mitchell’s Woodstock (1969). The lyrics emphasise the need to get back to nature and “lose the smog” of city life.

Both paintings depict the impact of humans on nature. For instance, the footsteps of thousands of walkers wearing a path through the grass or churning up mud. More than snapshots of the ground, these are “meditative reflection[s] on rain and our sun, the elements and forces that give and sustain life.”

The Thin Blue Line (Figure 4) similarly links the everyday and special. Observed while Ibbotson lay outside on a clear day, this is an intimate painting as we see the view directly through her eyes.

Ibbotson often adds new layers of meaning through symbolism. However, the three layers of The Thin Blue Line exist literally. First, a black background to represent space, secondly the ‘thin blue line’ of the earth’s atmosphere, and finally an opaque zinc white later for clouds and water vapour.

Holding Together (Figure 5) embodies the fire element. Ibbotson was drawn to a magazine photograph of the twin towers attack of 11 September 2001. From the image, “a large, bloody face emerged” which Ibbotson saw as an “invented ‘god’ in the middle of the explosion.”

Her painting immortalises another explosion. While the title suggests things are ‘holding together,’ the only thing holding the impact together is the painting itself. Holding Together highlights how art can seize a single, irretrievable moment of time.

Sickert also drew inspiration from topical events. He became interested in real crime while working in his Camden Town studio – after which the Camden Town Group would be named. This interest developed after the murder of Emily Dimmock in Camden and the following sensationalist media coverage.

At this time, a passion for the macabre in literature gripped London. This reached from reports of real murders, including the infamous Jack the Ripper, to the popularity of Sherlock Holmes. Sickert, however, was one of very few contemporary artists drawing such scenes outside of the press.

Ibbotson and Sickert personify very different definitions of the realist style. However, both depict moments and scenes that are perhaps conventionally seen as undeserving of artistic treatment. Through their skills, they elevate and make more beautiful the everyday sights and non-traditional subjects of working-class life.