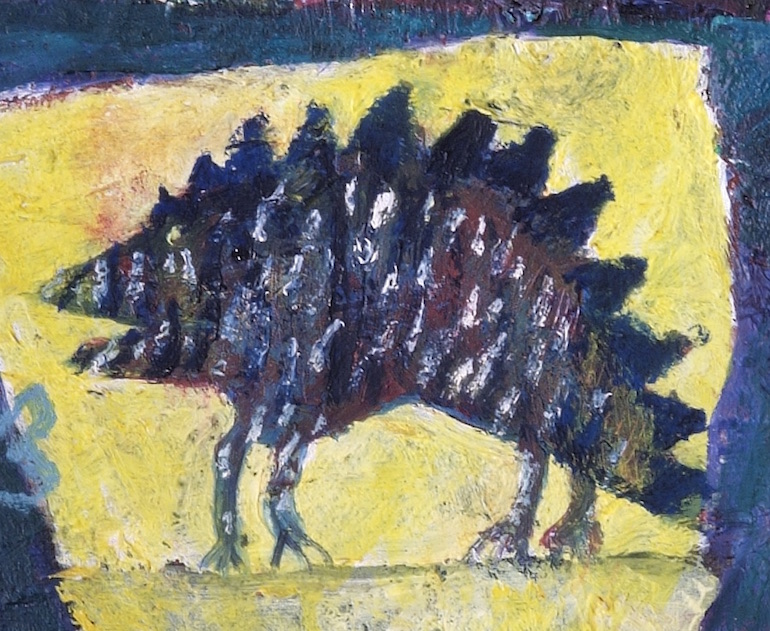 ANIMAL: World Art Journeys is not an exhibition in which you would naturally expect to find paintings by the artist and Royal Academician Bob and Roberta Smith (b.1963), and especially not paintings of sea creatures. Text, not pictures or symbols, is their typical medium, and they are most famous for their provocative, brightly coloured slogan paintings that mix the creative with the political. Famous works like Make Art Not War (1997) and Letter to Michael Gove (2015) argue for the central role that art should play in every aspect of public life. Bob and Roberta Smith make the case that “Art is Your Human Right” and their curatorial and community projects fight for the democratic importance of art and against the downgrading of art education in schools. During the lockdown, their campaigning has extended to daily releases of creative #stayin tasks on their Instagram page, featuring instructional slogans and videos, where “the idea is to get people to realise that they have an individual voice and that they have to look after this voice in a time of crisis”. Slogans include “We are going to crush the virus with art!”

But what does any of this have to do with Reading and sea creatures?

In fact, Bob and Roberta Smith is the pseudonym of Patrick Brill, who began his career by studying art at the University of Reading from 1981-1985. The paintings What Lobster? (1985) and Hayeem Marine (1985) are both works from Brill’s final degree show, where – anticipating his promise as an artist – the first was acquired by Reading Museum and the second by the University of Reading. Thanks to their representations of sea-life, the paintings have been brought back together for the first time in 35 years for ANIMAL: World Art Journeys. With the galleries closed for the time being, the lockdown offered the perfect opportunity to ask Bob and Roberta Smith about their experience of studying in Reading, and the role of sea creatures in their journey to slogans. When approached with this blast from the past, they generously shared some memories with me.

“Both paintings kind of reflect the fun time I had at Reading although it had been difficult,” Bob and Roberta Smith said. “My father died when I was at college when I was 21, so these two paintings marked a period when I had begun to get back on my feet again. I have always been a very productive person. Even after my father’s death I made tons of paintings, but I remember really getting into colour and humour in that last year.”

The humour of What Lobster? references a Monty Python sketch: “I think John Cleese was dressed as an elk but refused to acknowledge the fact. The main subject of the painting is a lobster but I as the author [of the painting], I am denying there is a lobster.”

Presented in an ornate chalice sitting on a bed of pasta, set against a stormy seascape and balanced on a curious jade green plinth (resembling a mix between crystal and drapery), the lobster in question could not be more conspicuous – nor the painting more surreal. The chalice hints at another key reference point with which Brill was experimenting at the time, religious painting. This is echoed in the modified triptych format of the painting, with two smaller canvases attached at the top and bottom of the central picture. Referencing the traditional lunette shape of medieval altarpieces, the canvas at the top depicts “a sort of church depicting a sort of heaven”, whilst the rhombus-shaped canvas at the bottom –with no traditional precedent – depicts “an underwater world” with fiery, hard-edged architecture evocative of the descending circles of hell. As a student exploring an interest in storytelling-painting, a pursuit that “was seen as eccentric” in early 1980s art school, the sources Brill was drawing on were complex: “so [What Lobster] was kind of a kind of reference to Giotto, or perhaps [Max] Beckman, or comics…”.

Hayeem Marine, by contrast, has a more personal narrative. It is a symbolic portrait of a longstanding (and still active) friendship that Brill began at the University with postgraduate art student Norman Hayeem, described as “a real artist, a lovely free spirit”.

The painting reimagines Hayeem’s practice which focused, at the time, on images of sea creatures. The scene evokes a sunken, underwater film premiere and the central creature – possibly a marine iguana – is theatrically highlighted by the dazzling light of a projector. The show is attended by an audience of enraptured shells. Almost in place, one might imagine, of the Hollywood sign, the horizon line is dominated by a playful reference to that equally iconic symbol (especially of student life), the McDonalds “M”.

Brightly coloured paintings combining personal experience with popular culture advertisements are reminiscent of the 1960s British pop art movement. One of the movement’s most important contributors, and one of the most important painters of the 20th century, was Bob and Roberta Smith’s now fellow Royal Academician, David Hockney (b.1937). In the early 1980s, Hockney was already a prominent international artist. He had been working on set designs and costumes for Parade at the Metropolitan Opera House as well as photocollages and bright, expressionistic, colourful landscapes – of which there are echoes in What Lobster and Hayeem Marine. Recalling a “great Hockney Show at Riverside studio’s where he showed paintings he had made for Les Enfant et Les Sortilege by Ravel”, Bob and Roberta Smith agreed that Hockney was a prominent influence for Brill as a young painter who hadn’t yet decided which route to take artistically: “I loved that show”.

In general, Bob and Roberta Smith recall their time in Reading as “a space of experimentation”. Taught – with a light touch – by tutors including Richard Wilson (b.1953), Anne Bean (b.1950), Bill Culbert (b.1935) and Ron Hasledon (b.1944), the students were largely left alone to develop: “We just made art”. For Brill, this was a positive.

“…after that degree I won a scholarship to the British School at Rome. So, all in all, it was a great launching pad. We were very lucky. We had grants, we had special grants to buy materials and cameras, free food and lodging. I made great friends, most notably Andrew Bick and Cornelia Parker who I have known since then. I lived in various houses in Reading that Conney had lived in which were all filled with old bric-a-brac and broken metal teapots. The soundtrack was the Fall and the Smiths who I saw in the student bar.”

Thinking back to their current practice, the place of early works like What Lobster and Hayeem Marine also seems clearer for Bob and Roberta Smith now than it had done before, when “I sort of separated myself [from them]”. So, what links slogans and sea creatures after all?

“As I get older, I can see that a lot of my work is playful and, in some ways, game-playing”.

One thought on “From Sea Creatures to Slogans: Game-playing with Bob and Roberta Smith RA”