> Collections - Special Collections > Item focus > College Song No. 1, “The Song of the Shield” 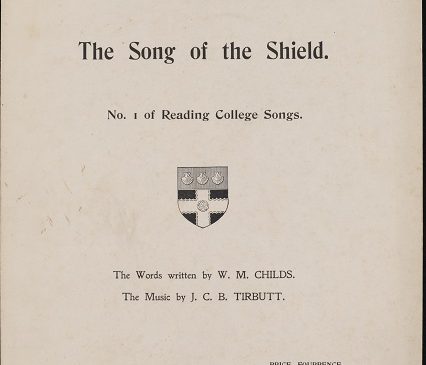 Since the University celebrated the 90thanniversary of the granting of its Royal Charter last Thursday, many people have been asking for the words of College Song No. 1, “The Song of the Shield”, which was performed with gusto by the University Chamber Choir that evening under the direction of Samuel Evans. It was discovered in the University Archive just a few months ago.

inspiration for the song, the Coat of Arms, may be found here, and it is fitting that the original Grant of Arms from 1896 was on display last Thursday as well.  As for the style: well, it’s unlikely to be covered by will.i.am any time soon, but it’s very jolly and evokes a strong sense of the College in its early days when everyone would have known each other. Rumours of compulsory singing of the song before every lecture next term are thought to be unfounded.

Congratulations to all involved in bringing this hidden piece of our past to light. The other music performed at the meeting of the University Court on 17 March included Prelude and fugue in C minor BWV 549 by J.S. Bach, which was also performed at the inaugural organ recital in the Great hall in 1911; I Vow to Thee, My Country by Gustav Holst (words by Cecil Spring-Rice) – Holst taught at the College from 1920-1923; and My Spirit Sang All Day, No.3 from Seven Part Songs op.17 by Gerald Finzi, whose literary collection is held here

Special Collections will continue to support the 90th Anniversary events with a series of displays during the Summer and Autumn.