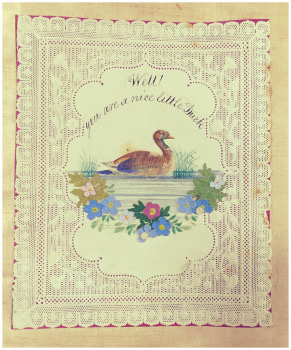 Today the theme of Explore Your Archives is Archive Animals so we’re going to have a look at some of our wonderful archive Ducks!

Let’s start with perhaps our most famous duck, Jemima Puddle-Duck! UMASCS holds a 1908 edition of the tale, beautifully illustrating the adventures of Jemima who gets into trouble with a fox when leaving the safety of the farm to hatch her eggs. Jemima was based on a real duck that lived at Hill Top farm, the home of author Beatrix Potter.

According to the charmingly illustrated ‘Ducks: Art, Legend and History’ by Anna Giorgettii, [Merl Library 4534 GIO] ducks belong to the Anatidae Family, a word derived from the Latin ‘anas’ meaning ‘to swim.’ The book goes on to give all kinds of interesting facts and stories about ducks, including the idea that in ancient China a prospective lover would send a live duck or goose to the woman he desired.

Our modern term of endearment ‘duck’ was even used by the Romans in the form of ‘aneticula’ or ‘duckling’ (p82). It’s unsurprising then that this sweet Valentine’s Day greeting from our John Lewis Printing Collection (Group XII 1), dating to 1858, features a little duck!

In the beautifully designed ‘A Book of Ducks’ by Phyllis Barclay Smith, we learn that it was King Charles II in 1661 who first formed a collection of wild birds in St James’ Park, so setting a precedent for the creation of collections in parks, lakesides and ponds across the country.

The great range of birds within the ‘Anas’ genus is explored in ‘A History of British Birds’ vol. II (1805) alongside beautifully detailed wood engravings by T. Bewick. For example, the rather cute ‘Scaup Duck’ (bottom centre in the picture to the right) is described as having a broad, flat bill , a black head and neck glossed with green and fan shaped brown tail feathers.

Finally we have ‘Ploof – the wild duck’, number 3 of the Père Castor wild animal books series, written principally by Lida Durdikova.  Originally published in Paris in 1935 by Flammarion as ‘Plouf, canard sauvage,’  it tells the story of the duckling’s birth, his first visit to the pond, a frightening attack by a hawk and his adventures out on a big lake before finally describing his migration south for the winter.

Russian illustrator, Feodor Rojankovsky, is quoted describing his artistic beginnings developing from a trip to a zoo being followed by a gift of colour crayons. His beautifully intricate drawings of Ploof and his friends show that animals must have continued to fire his imagination! 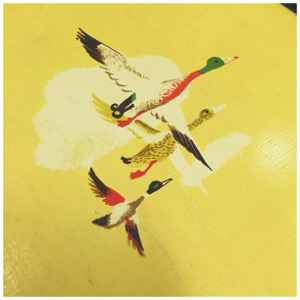