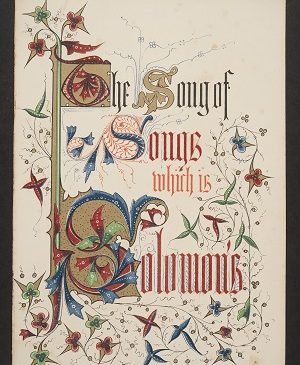 When turning the pages of The Song of Songs, one of our recent acquisitions for the Printing Collection, for the first time, you could be forgiven for thinking it is a medieval illuminated manuscript, with a handwritten script and elaborate handpainted illumination. However, it is actually a printed book, published in 1849 by Longman, and written and ‘illuminated’ by the influential artist, designer and architect Owen Jones (1809–1874). 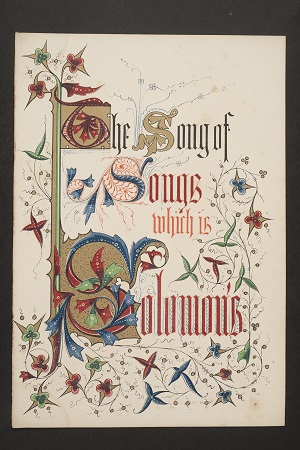 The Song of Songs, also known as the Song of Solomon or Canticles, is the fifth of the “wisdom” books in the Old Testament of the Bible. This romantic song or poem is a celebration of sexual love which has been interpreted in numerous ways. In the Christian tradition, for example, in addition to recognising the literal meaning of a romantic song between man and woman, the poem has also been read as an allegory of Christ (the bridegroom) and his Church (the bride).

Religious works such as The Song of Songs appealed to the Victorian taste for morality and piety, and Owen Jones produced a number of other ‘illuminated’ gift book editions of religious texts, including the Sermon on the Mount (1844, 1845), The Psalms of David (1861) and The History of Joseph and His Brethren : Genesis Chapters XXXVII. XXXVIII, XL (1862), and we have copies of all of these books in the rare book collections. All of these works, including The Song of Songs, were printed using the technique of chromolithography, a new and elaborate method of colour printing. 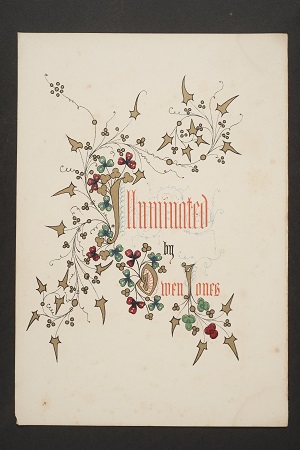 Owen Jones is perhaps most well-known for his influential publication, The Grammar of Ornament (1856), a lavish compendium of nineteen styles of historic and world ornament, concluding with a final chapter on nature. The book contains one hundred magnificent and highly detailed chromolithographed plates of ornaments drawn from architecture, textiles, tiles, rare books, metalwork, stained glass and many other decorative arts, and was the subject of one of our Featured Items. Jones’s publication Plans, elevations, sections and details of the Alhambra, which appeared in several parts between the years 1842 to 1845, was to be the first significant published work to be printed using chromolithography, and a copy of this two-volume work is held in our Overstone Library collection. 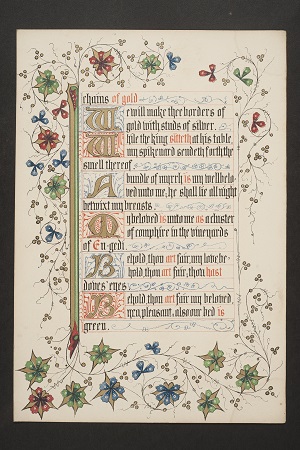 The Song of Songs is also interesting for its original brown ‘relievo’ binding [see image below], a Victorian invention of moulded and embossed leather which was intended to imitate both medieval books and wood carvings. The Psalms of David, another of the ‘illuminated’ religious publications by Jones in our collections, has a similar binding (by Leighton, Son & Hodge).

This new acquisition not only complements the other publications by Jones which we hold in our collections, but also examples of original artwork by Jones for diaries, calendars and Huntley and Palmers biscuit packaging, held in the University’s archive collections. 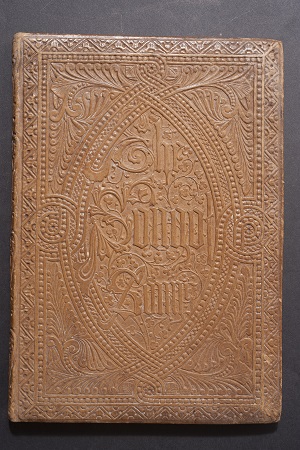 This post also presents a good opportunity to pay special tribute to the work of Geoff Gardner and Jane Li from the University Library, who do a great deal of our rare book conservation work. Geoff and Jane produce many intricate book repairs and make special boxes for our rare books which enable many of our treasures to be handled and studied by students and other researchers, and to be in a suitable condition to exhibit as part of displays here at Special Collections and to be loaned to other institutions for external exhibitions.

For example, in order to protect the relievo binding of The Song of Songs, Jane produced this exquisite, padded conservation-standard box [see image above] in which to store the book, reproducing designs from the book to create a suitably elegant and decorative design. We are very lucky to be able to undertake conservation work and repairs in-house and are very grateful to Geoff and Jane for their hard work!