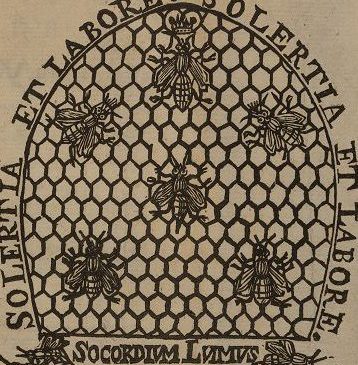 Many research projects have been disrupted or have come to a halt with the lockdowns imposed due to the COVID-19 pandemic. However, we have been cheered and inspired by reports from a number of our resilient students and researchers who have found ways to continue their study and research during this difficult time. Following on from Christopher Adams’s blog post in October about accessing our archives through our digital service, Olivia Blackburn tells us about her experience of working on a UROP project during lockdown:

During the late summer and early autumn of this year, I worked on an Undergraduate Research Opportunities Programme (UROP) project entitled ‘Bees in the Collections’. This project set out to explore the linguistic and social meaning of bee colonies within the context of human colonialism. This project was initially designed to explore the rare book collections of the University of Reading Special Collections. Unfortunately, due to the national lockdown, the collections were closed to researchers, and the project had to be reframed as an online placement.

I decided to take a comparative approach in this project, due to the respective specialisms of my supervisors, Dr Helen Parish and Dr Rohan Deb Roy. I began by looking at Early Modern works about bees. I found that beehives were often depicted as allegorical, ideal Christian societies for humans to model themselves on. In some cases, they were even used to naturalise and justify human power hierarchies, such as absolute monarchies.

Once I had established Early Modern depictions of apian-related material, I began moving my research into the modern period. Here, a juxtaposition emerged. Natural beehives, those made by bees, continued to be depicted as virtuous sites of societal ideals. On the other hand, man-made beehives were heavily criticised as being sites of absolute exploitation. Their design, and often transparent material, allowed bees to be wholly exploited, just as humans could be wholly exploited in Victorian society.

The original aim of this project had been to explore comparisons between bee colonies and human colonial endeavours, and this is what I began to consider in the second half of the project. I found that imperial entomologists argued that natural beehives, such as in India, showed the ‘savage’ and uncivilised nature of colonial subjects, allowing justifications for imperialism to flourish. Interestingly, in this context, natural beehives were no longer idealised, it was man-made hives which showed supposed civility in society. This juxtaposition shows that the depiction of beehives in
society depended largely on social assumptions and contexts.

Despite this project being held exclusively online, it has given me an insight into how an active research project operates and develops. I have gained extensive knowledge into the social perceptions of bees in a variety of societies, and how these ideas have developed over time to inform human behaviour. This project also has an important conservation aspect, as examining the importance of bees to society is vital to understanding how their conservation can be successfully ensured.

Find out more about this UROP project, and explore our bee collections, through our online exhibition ‘Bees in the Collections’, curated by Olivia Blackburn.