Fear is a very human emotion to which we can all relate. It played a major role in ancient Greece and took on many forms, such as the fear of death and the afterlife. We come closer to understanding the lives of ancient Greeks when we can identify their fears and learn how they responded to them. By analysing a range of resources found throughout the Mediterranean, we are able to have a multicultural perspective. The Sphinx, for example, was an Egyptian creature who guarded tombs and temples and in Greek mythology was known as a dangerous beast who would kill those who could not answer her riddle. With this exhibition, you can take one step closer to the people of the ancient world in learning about the monsters and other things they feared.

Herakles' Fight with the Nemean Lion

Kerberos and the Underworld

The Face of Medusa

Youth Bribing Charon with a Bird 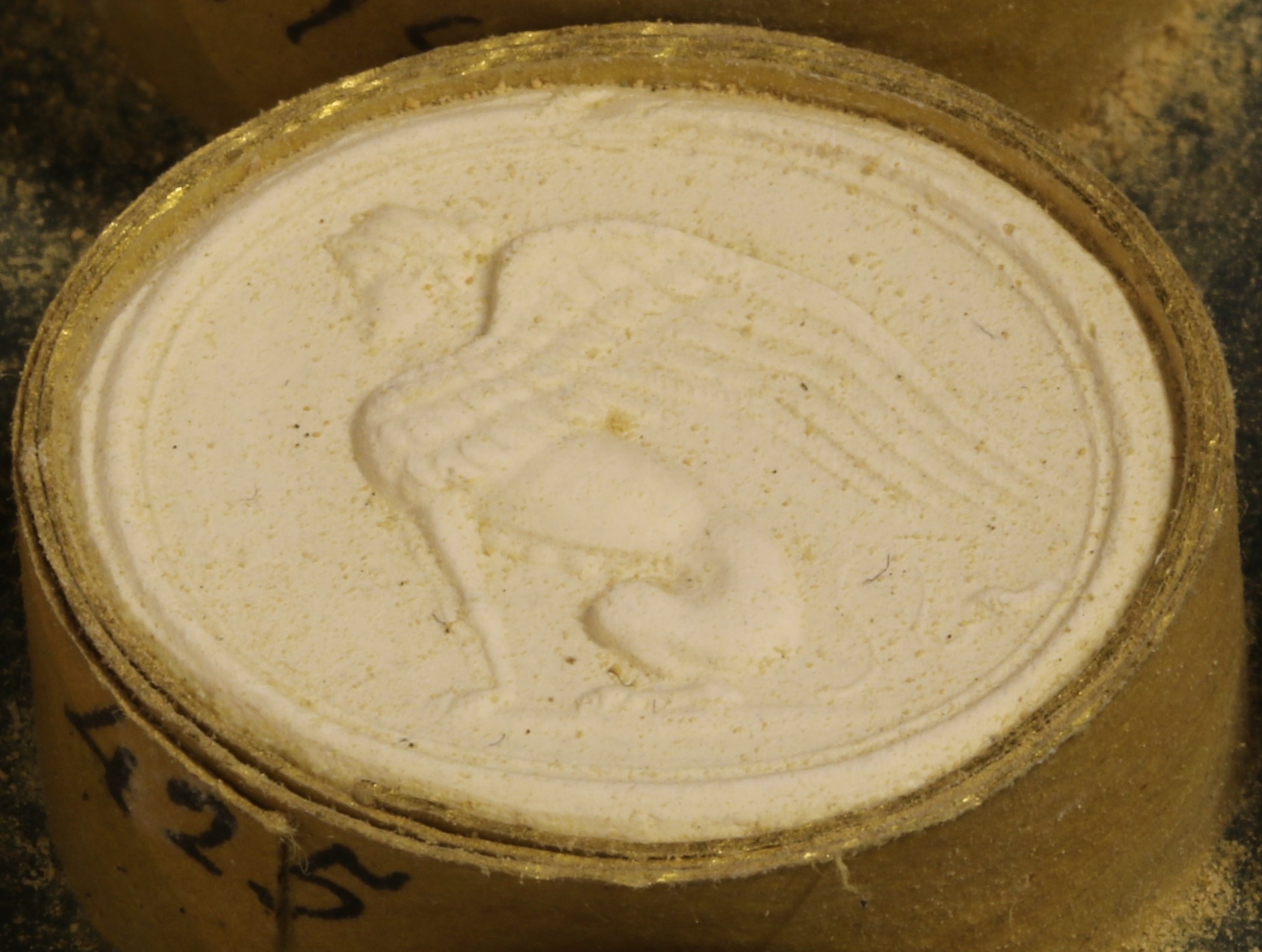 Ancient Greeks, like most people, feared death. The Sphinx embodied this fear and was a creature with the body of a lion, the wings of an eagle and the head of a woman. According to the story of Oedipus’ encounter with the Sphinx at Thebes, she asked anyone who crossed her path to answer a riddle about mankind. She killed each person who failed to give the correct answer but when Oedipus told her the right answer, she took her own life. Through this story, the presence of the Sphinx marks the transition from life to death. Images of sphinxes therefore decorated tombs and temples. On gems and other arts, sphinxes were used as apotropaic devices, that is, to ward off evil spirits and protect the user—whether alive or dead—from any dangerous forces that might affect them. The image of a sphinx on a neoclassical gem—after which this cast was made (ca. 17-19th c AD)—would have been used to protect the owner from dangerous forces. 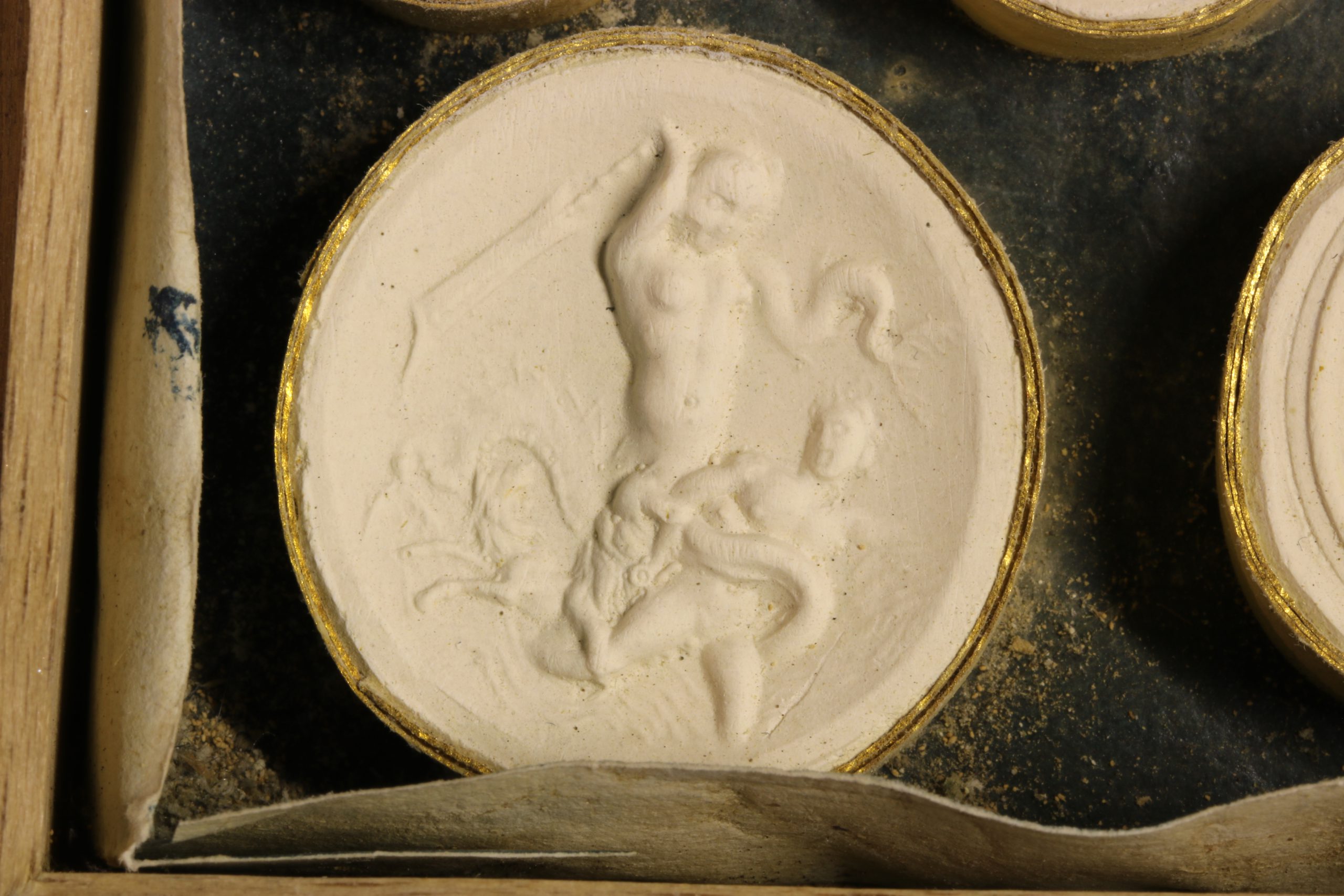 Another ancient Mediterranean monster connected to fear was Scylla, who perhaps dwelled in the Straits of Messina to the south of the Italic peninsula and attacked ships that passed her by. With 6 heads she could kill and eat up to 6 unlucky sailors. She is therefore a symbol of the dangers of the unpredictable seas. This neoclassical cast (ca. 17-19th c AD) represents Scylla attacking a sailor on an ancient gem that might have been worn by seafarers to protect them. 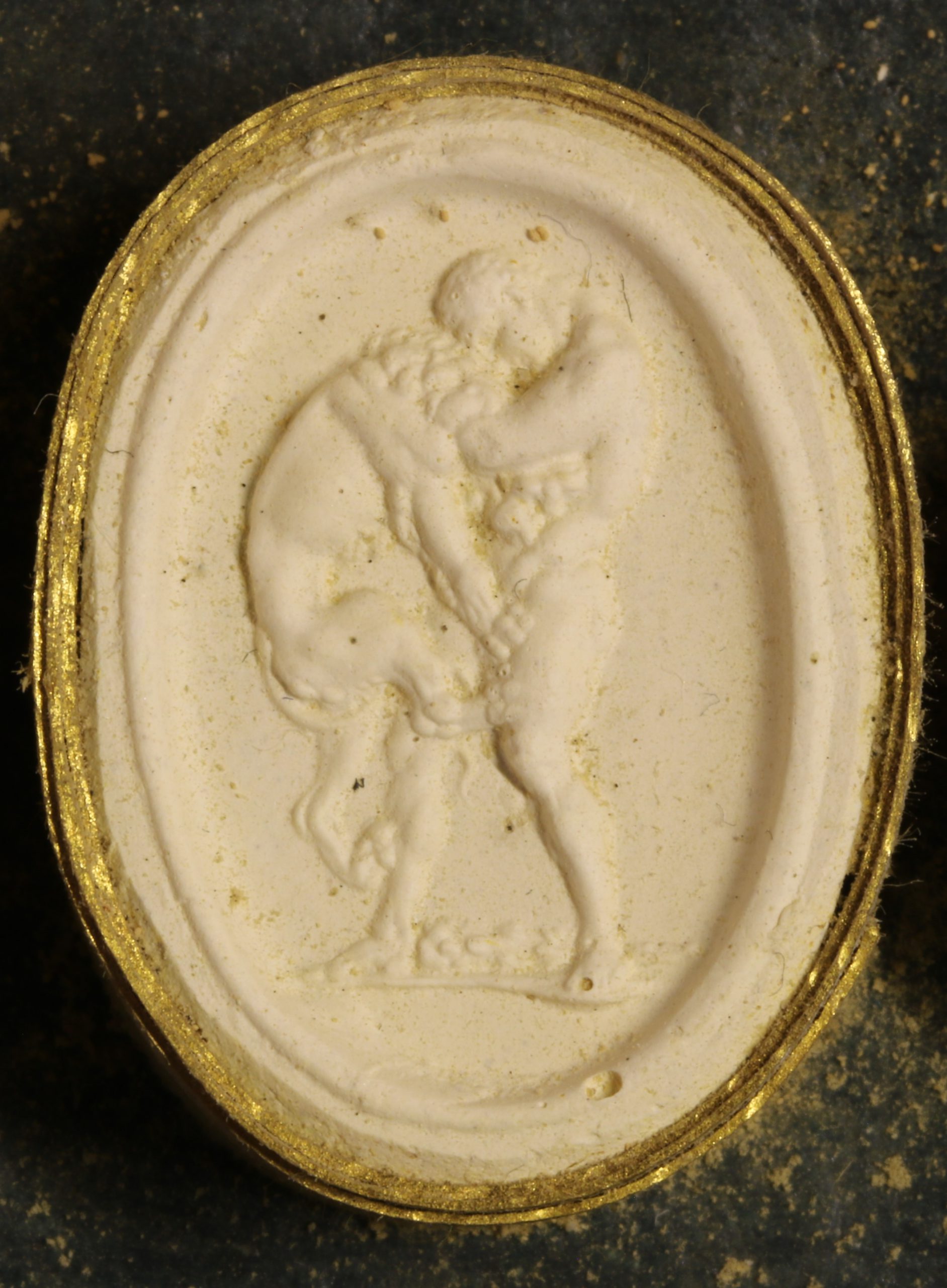 Herakles' Fight with the Nemean Lion

One of the most fearsome monsters Herakles (Hercules) fought was the Nemean Lion, born of Chimera and Typhon, who attacked anyone it came across. Normal hunting weapons could not penetrate its gold fur so Herakles used his hands to strangle the lion and use its claws to skin it. Hercules, therefore, represents the heroism, might and bravery one would need to overcome fear. The gem after which this cast was made (ca. 17-19th c AD) might have helped a young and inexperienced man overcome his fears to enter an age and status of authority. 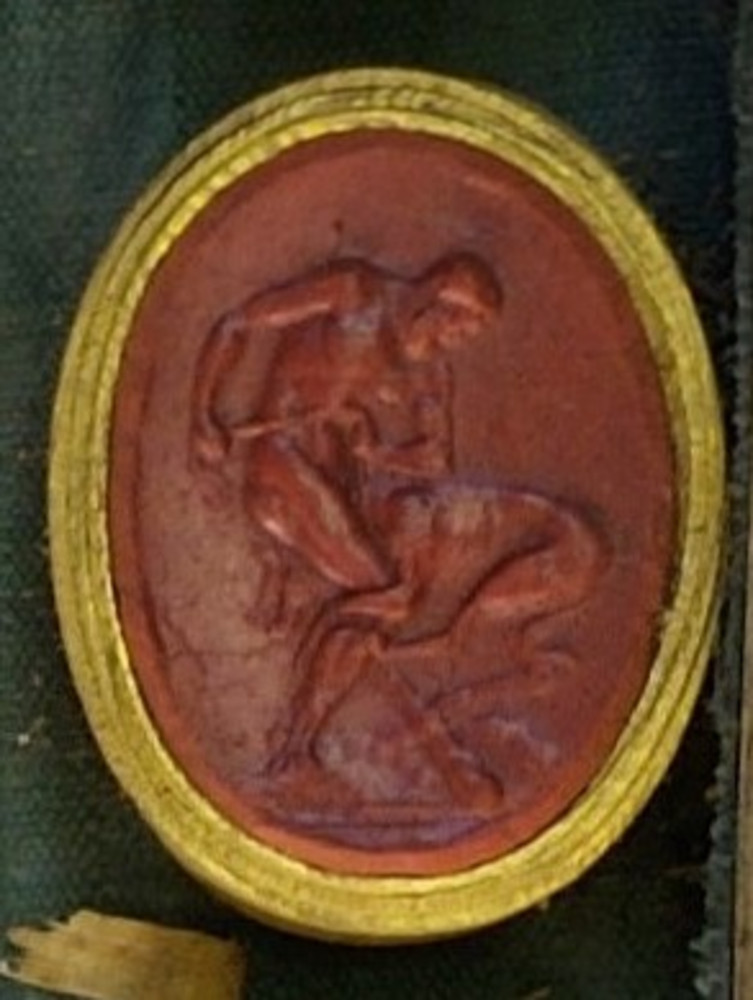 Kerberos and the Underworld

Kerberos (Cerberus) represents a fear of the unknown, as he guards the Underworld, about which little was known. This monstrous beast who could not be understood or tamed therefore highlights the ancient Greek fear of death. Herakles was the only person who was able to defeat this foul beast (with the help of the gods!) so this image on a gem (cast*) represents the overcoming of (the fear of) death. 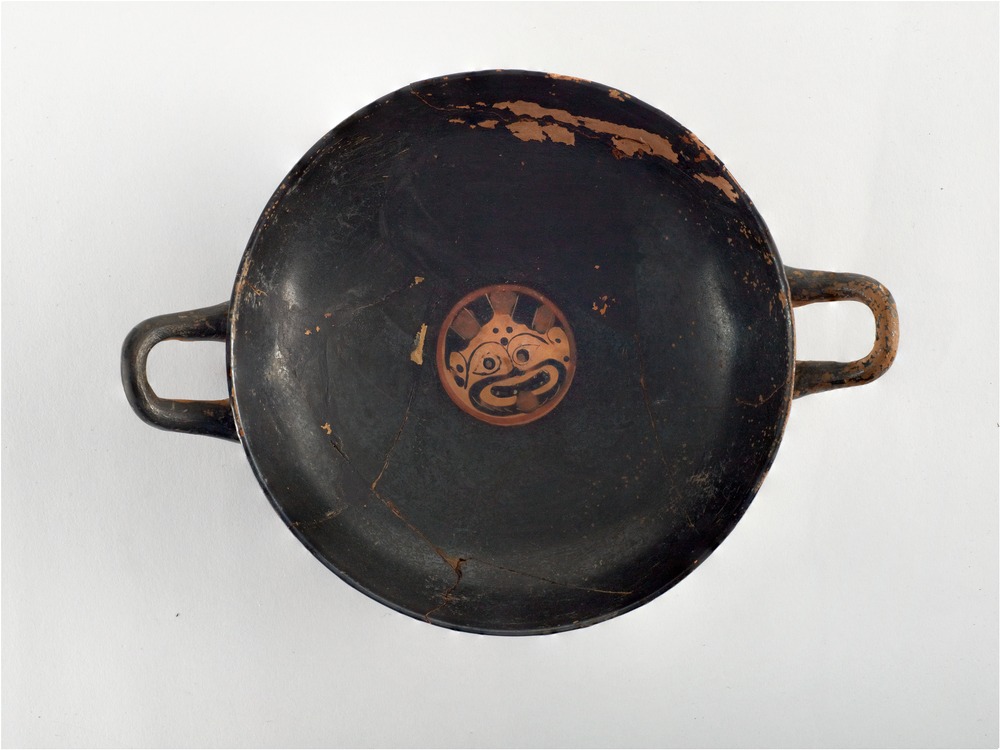 The Face of Medusa

After Poseidon forced himself upon the beautiful Gorgon sister, Medusa, Athena ensured no one would be able to set eyes upon her again, so that even one glance at her would turn the viewer into stone. This demonstrates that a woman’s beauty was feared: it causes others, especially men, to lose touch with reality and make poor decisions. Medusa’s face at the bottom of this Attic black-figure cup (ca. 525-500 BC) would have put fear into the heart of the drinker who just finished it off! 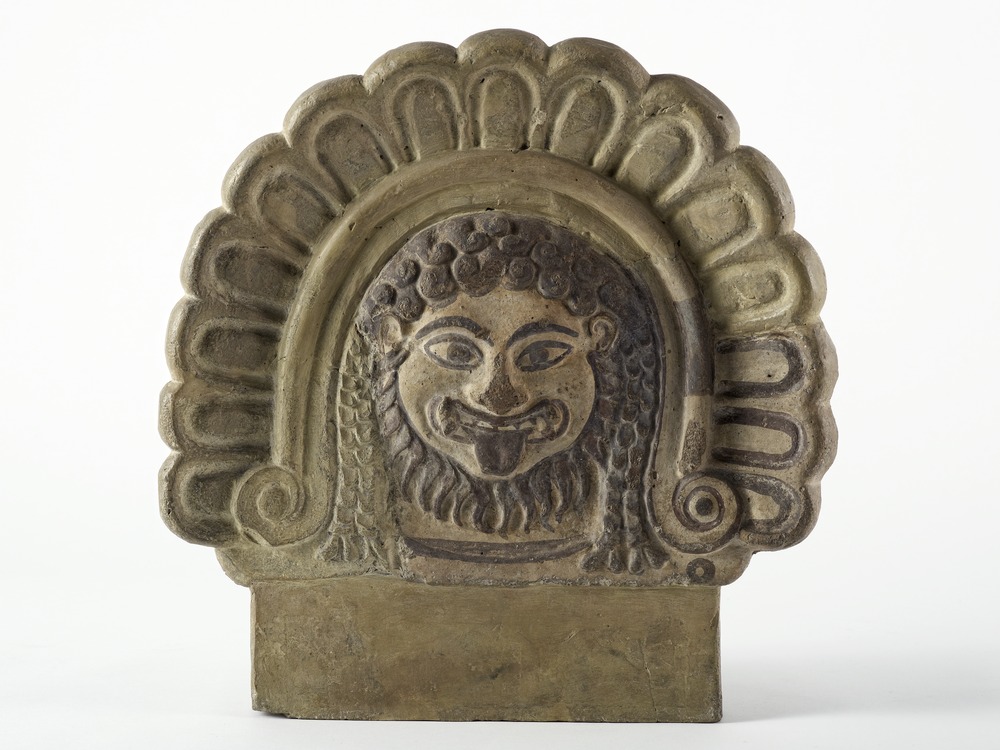 People in antiquity feared for their houses, lest they collapse, which would have been expensive and inconvenient. So some antefixes—roof ornaments that protected the ends of rows of tiles and therefore served as barriers to weather damage—were decorated with images of apotropaic devices to ward off evil spirits and to protect the house and its inhabitants. This antefix is decorated with the head of Medusa, the Gorgon monster whose mere glance could turn you to stone! 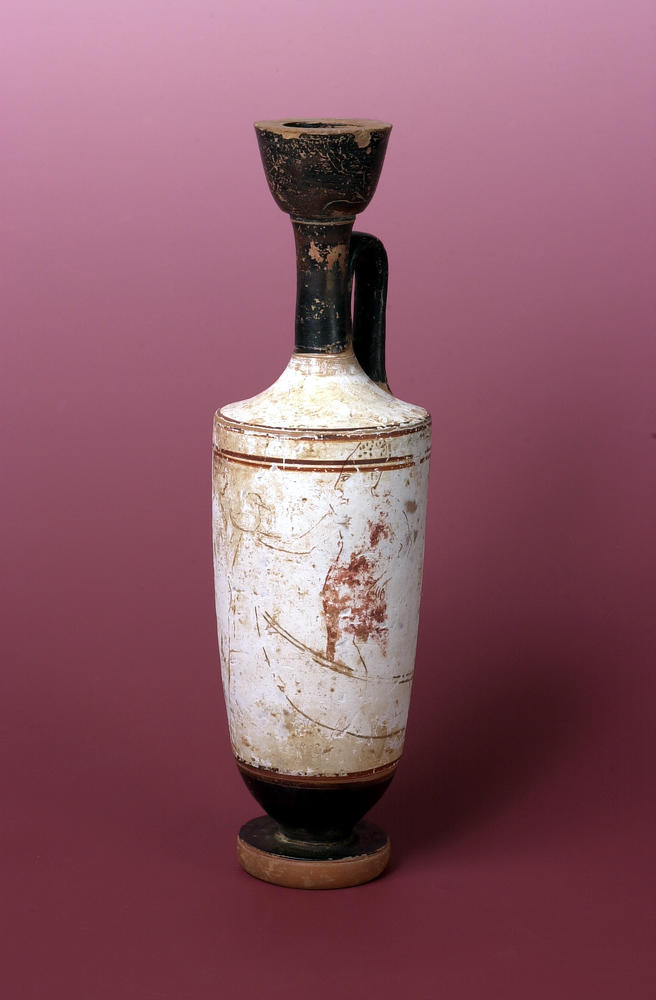 Youth Bribing Charon with a Bird

Grave gifts, like this white-ground lekythos or oil jar (ca. 425-400 BC), show images of the dead on their journey to Hades, the Greek underworld, which they feared. If they fell into the River Styx, at the boundary to Hades, they might never find eternal rest. The deceased would bribe the ferryman, Charon, to ensure their safe crossing of the river. This vase is decorated with a young man giving Charon a bird. Later sources suggest a coin was needed to pay Charon, so the dead were buried with coins on their eyes or in their mouths. 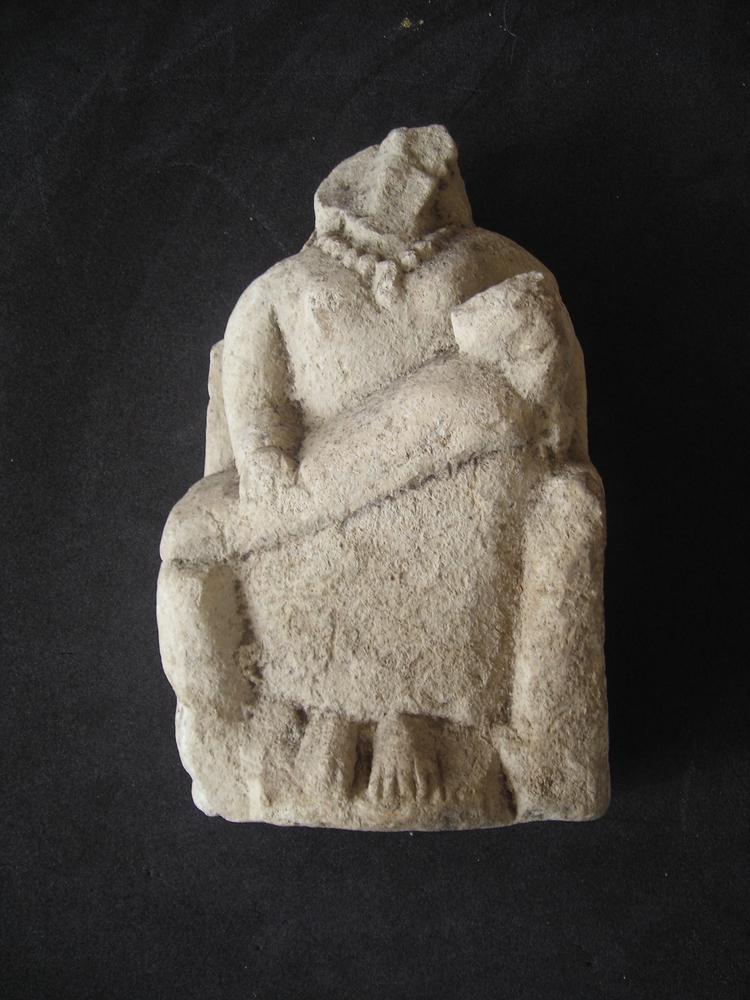 A kourotrophos was a person or divinity who cared for the young. Images of kourotrophoi like this Cypriote figurine (ca. 650-475 BC), showing a seated woman* with a baby in her lap, don’t always make it clear the identity of the childcarer but symbolise the protection that gods or heroes could give to children and their mothers while pregnant. Pregnancy and childbirth are complicated and, like most of us, the ancient Greeks feared infant mortality and the dangers posed to mothers.

*Her head has sadly broken off. 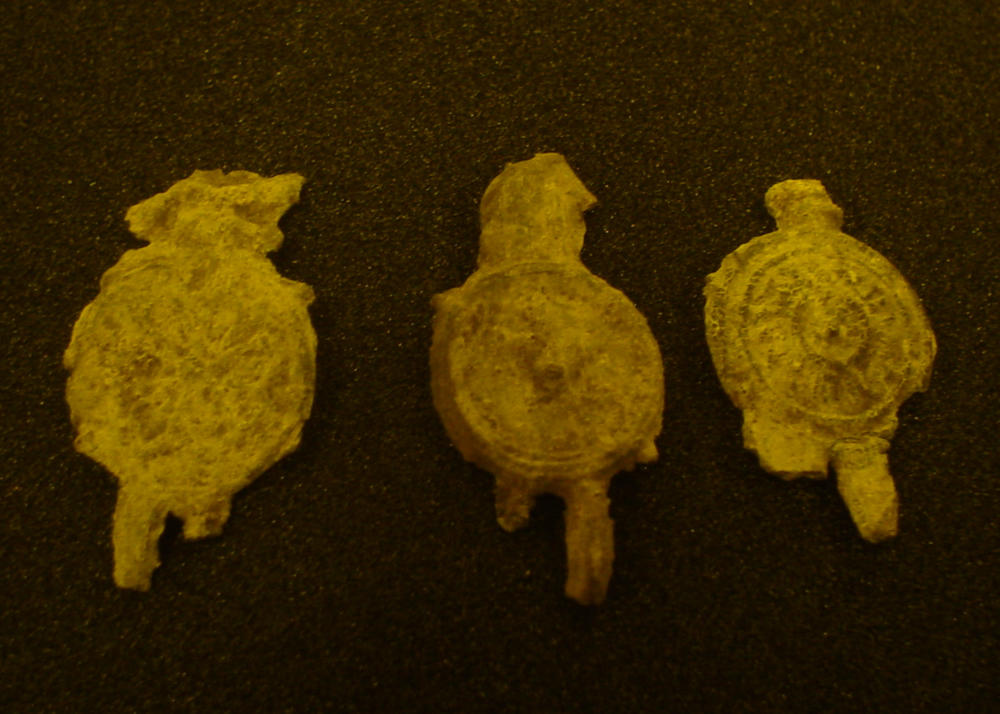 These tiny lead figurines, (ca 7th-5th c BC), depicting Spartan soldiers with their shields, were dedicated around the Temple of Artemis Orthia, in Sparta, as votives, to appeal to the gods for help during times of need. Ancient Greeks lived in fear of the power of the gods and believed the issues they faced were caused by divine anger.