The story of the Etruscans begins in the area of Italy today known as Tuscany, and starts in the Iron Age (10th century BC) when local communities, centred around groups of villages, started to establish cities and control of the land around them. As the cities grew so did the need for governance: a class of rulers emerged and public buildings such as markets and temples were built. With the land surrounding them rich in metal ores and fertile farmland, industry soon developed and trade with other nearby settlements began. By the early 7th century BC these cities had grown into small states that shared a common language and much of the same culture. The people of these cities called themselves the Rasenna, but we know them as the Etruscans, people of the place the Romans called Etruria.

As the Etruscan cities grew so did their interaction with neighbouring peoples. Soon Etruscan goods, such as iron, wine and art, were being traded outside of Italy. In return luxuries such as gold from Carthage, glass from Egypt and expensive pottery from Greece started to be imported into Etruria. The wealth from growing trade allowed the Etruscans to expand their control into the Po Valley and along the coast of the Tyrrhenian Sea [see panel], where they encountered Greeks who had founded new cities in Magna Graecia, the south of Italy and the island of Sicily. The Etruscans became fascinated by the culture of their Greek neighbours and began to adopt parts of it, like the symposion (a fashionable drinking party) and styles of pottery; they adapted the Greek alphabet  and added Greek gods, heroes and tales to Etruscan religion and mythology.

Wealthy Etruscans employed artists and craftsmen to create works of art in ceramic. Bucchero pottery, an invention of the Etruscans, was especially popular. Bucchero’s unique lustrous black colour was created by polishing and firing in a kiln starved of oxygen. The process called reduction firing causes a chemical reaction in the clay turning its natural red colour to turn to a deep black. Some even paid the potters of the Greek vases they loved so much to move to Etruria. Even in death rich Etruscans continued to enjoy luxuries: they decorated their tombs with ornate wall paintings celebrating life and filled with fine objects from both home and abroad. Some of the finest surviving examples of ancient Greek pottery come from these tombs.

In the 5th century BC the Etruscans fought with the Greeks of Magna Graecia over the control of trade and lost access to cities along the coast of the Tyrrhenian Sea, and therefore important trade ports. In the 4th century BC Celts from the north seized control of the Po Valley and lands to the east of Etruria. The Romans eventually brought Etruscan civilisation to an end. Rome, once a city under Etruscan control, had grown into a republic, and from the 3rd century BC began to conquer the cities of Etruria one by one. The Romans embraced much of Etruscan culture, just as the Etruscans had Greek: they adapted the Etruscan alphabet and took on features of Etruscan religion, for example the practices of augury and haruspicy, foretelling of the future by reading signs in nature and animal organs. By the start of the Roman Empire in 27 BC, Etruria was firmly a part of Roman Italia, and the parts of its culture, including its language, not taken on by the Romans were lost to time. 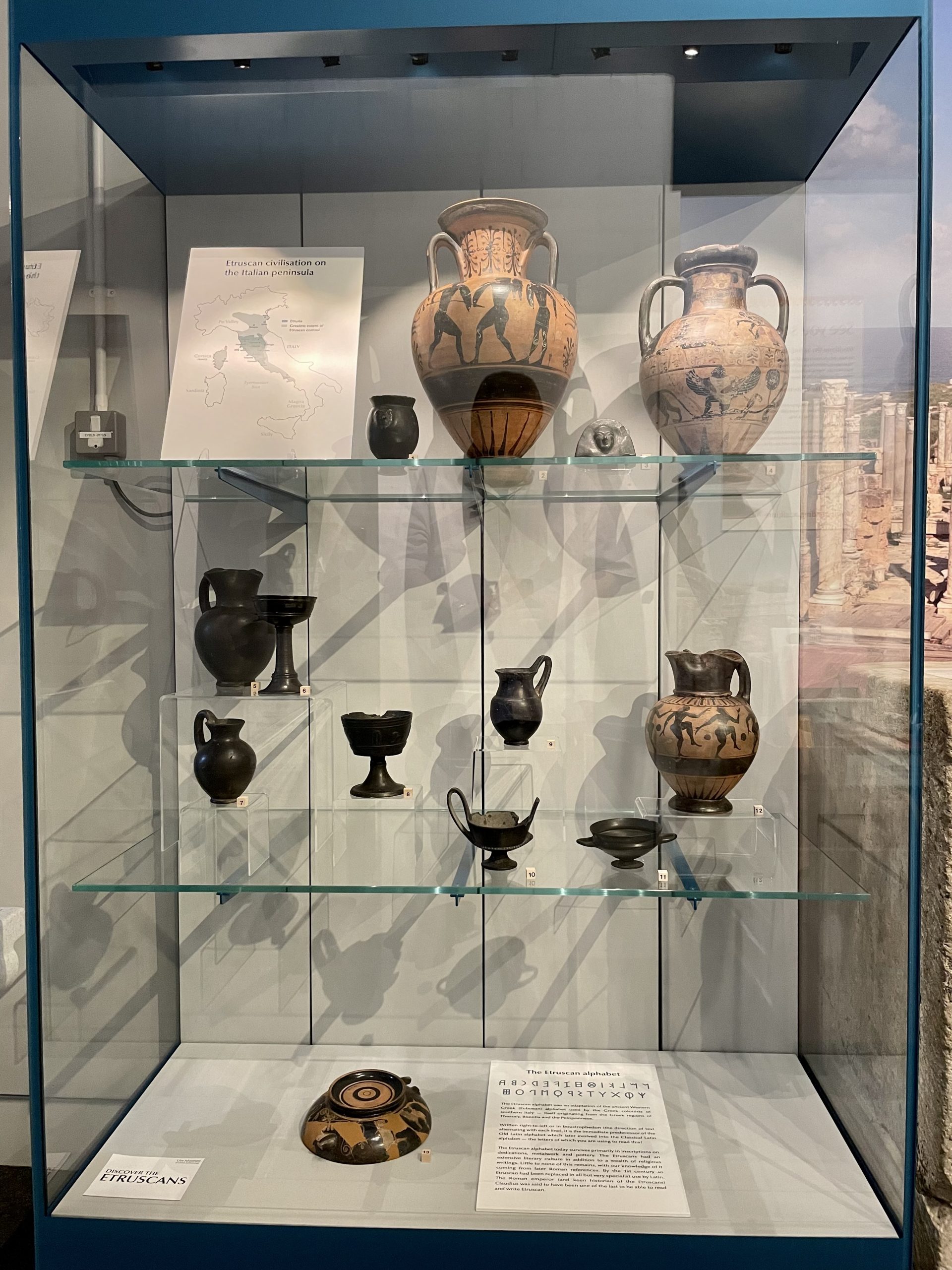 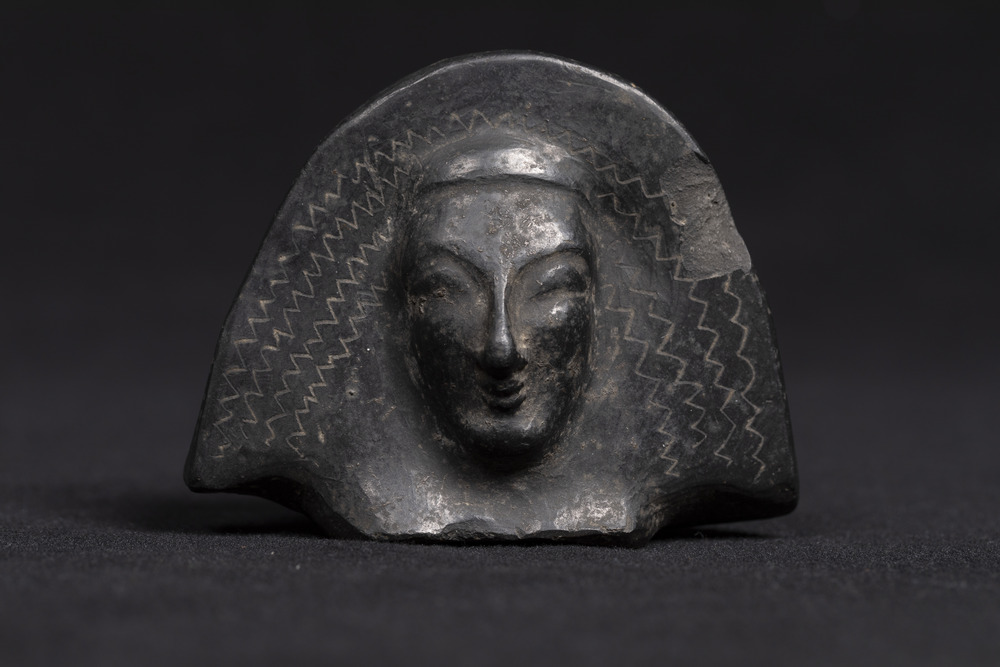 1 Mid 6th-century BC fragment of a bucchero focolare

This fragment featuring the face of a woman in relief is from the decoration of a focolare. Focolari were trays in the form of braziers that would be filled with pots and utensils and left inside tombs. Etruscan tombs were made to resemble homes, with furniture, tools and colourful paintings inside. [12.10.1] 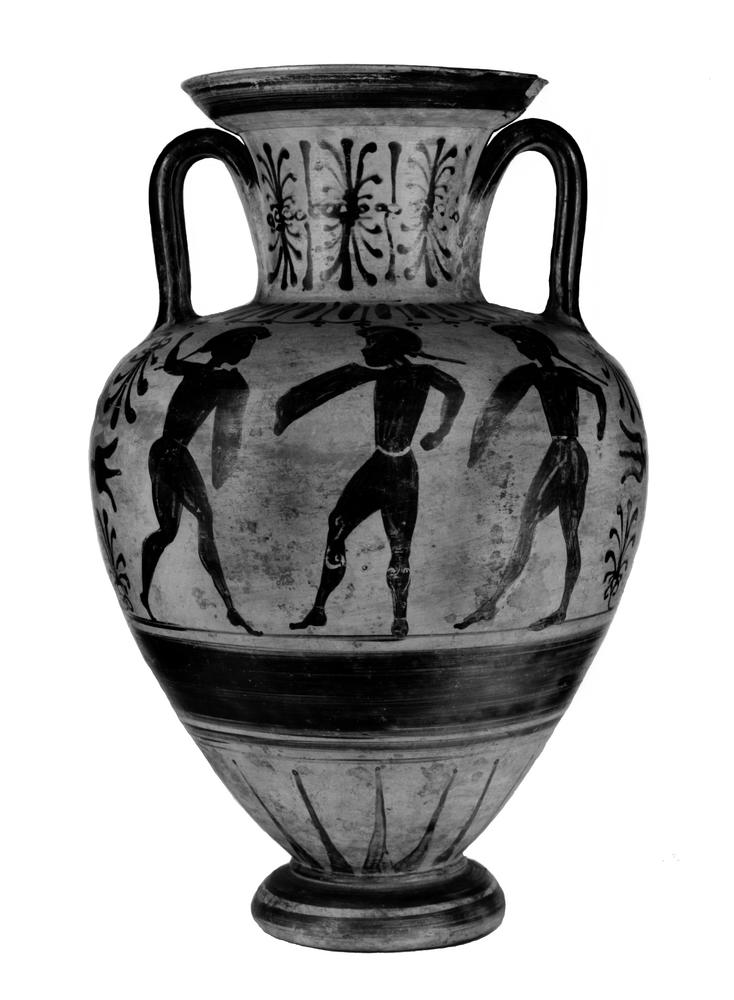 This amphora is decorated on both sides with hoplites (heavy infantry). Hoplite warfare emerged in Greece in the 7th century BC and was soon adopted across the Mediterranean. White paint has been used to pick out details, and traces of it are visible on the hoplites’ greaves and a shield. [39.9.2] 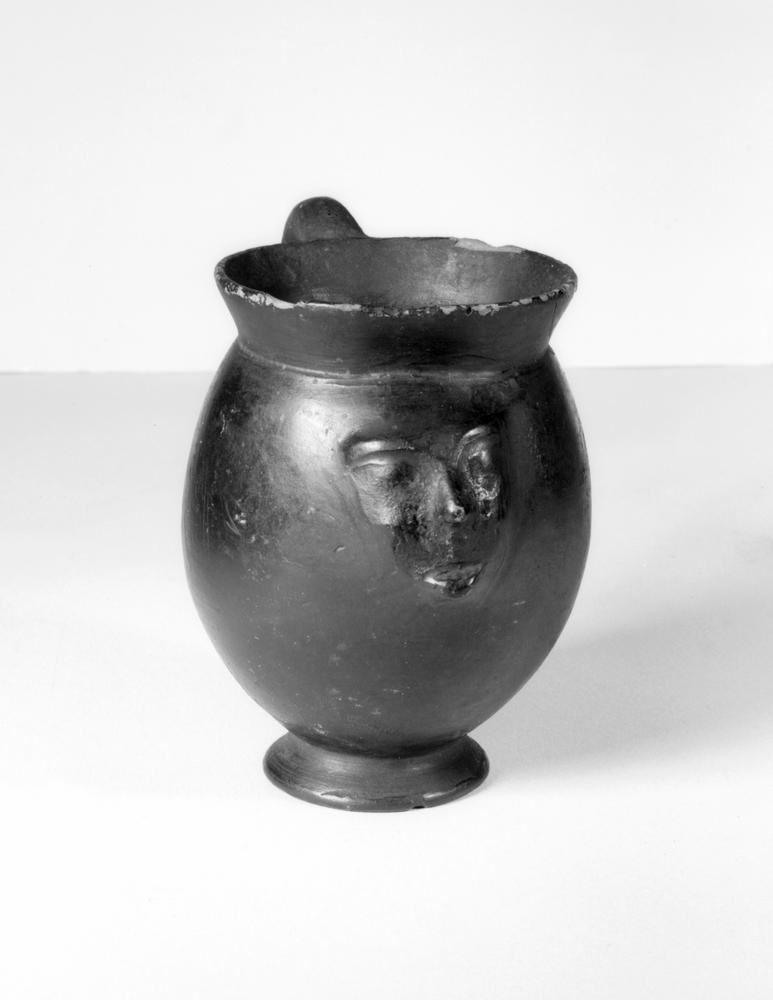 The face on this mug is an apotropaic device: a symbol used to protect something or someone from bad fortune. Mugs like this have been found in both tombs and in the remains of temples suggesting a religious use. [51.7.3] 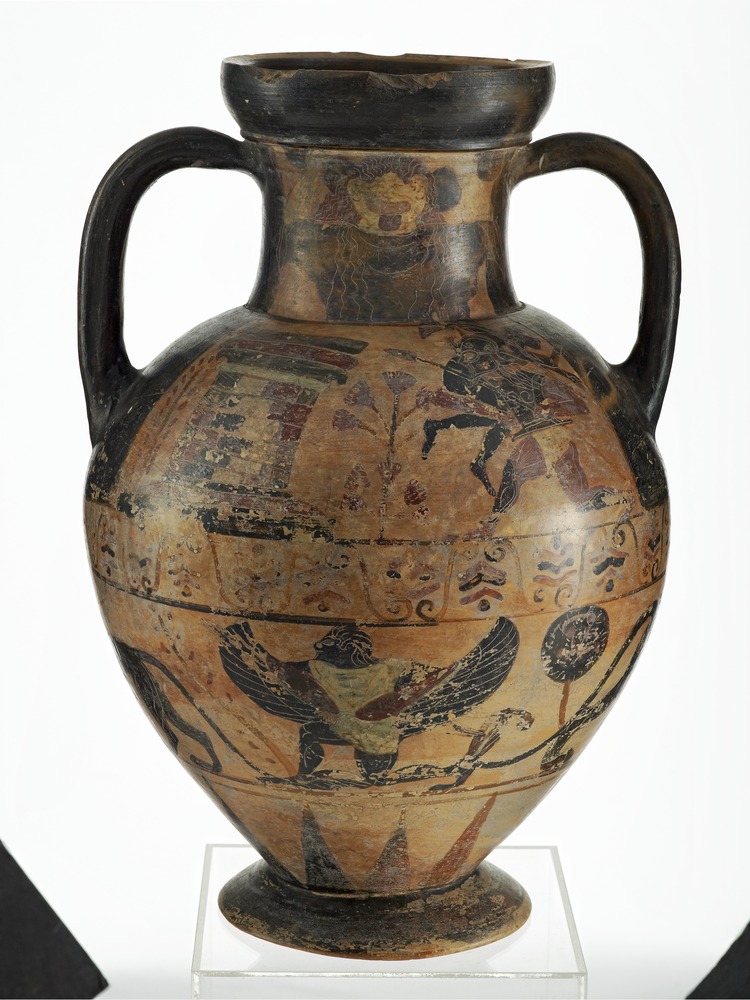 This amphora depicts scenes from the Cypria, a lost epic set before the Iliad. Both sides show the ambush and (coming) killing of the Trojan prince Troilos by the Greek hero Achilles. Termed Pontic this style of decoration is the product of immigrant Ionian Greek artists. [47.6.1] 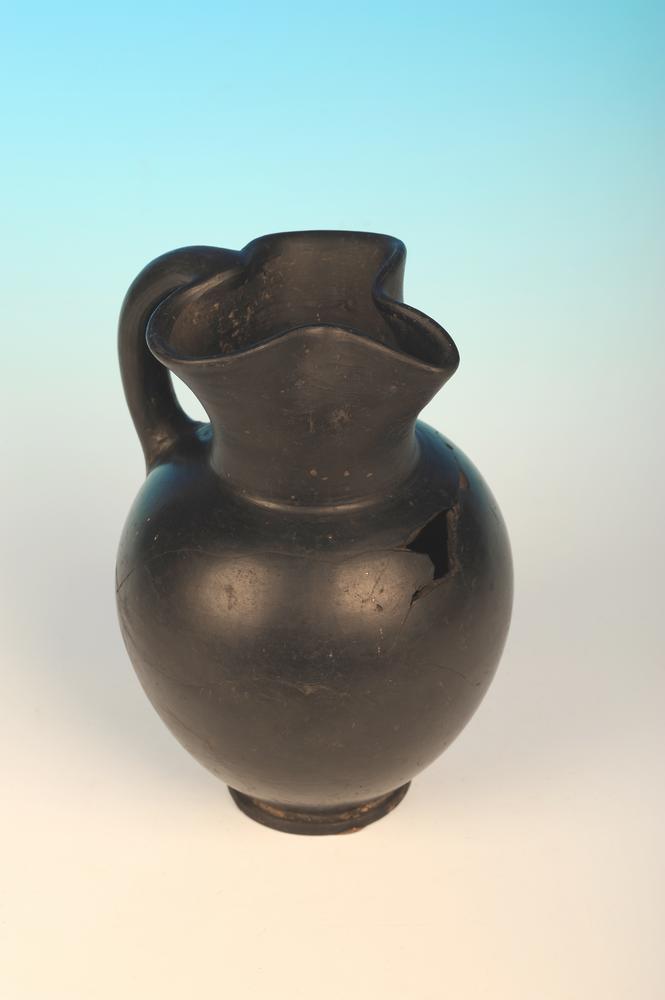 Oinochoes are a more complex form of wine jug. Many feature, like this one, trefoil lips to ease pouring. Ancient wine was very alcoholic and was mixed before serving with water (and other flavourings) in large vessels called kraters. Jugs were then used to serve wine from the kraters into individual cups. [50.4.9] 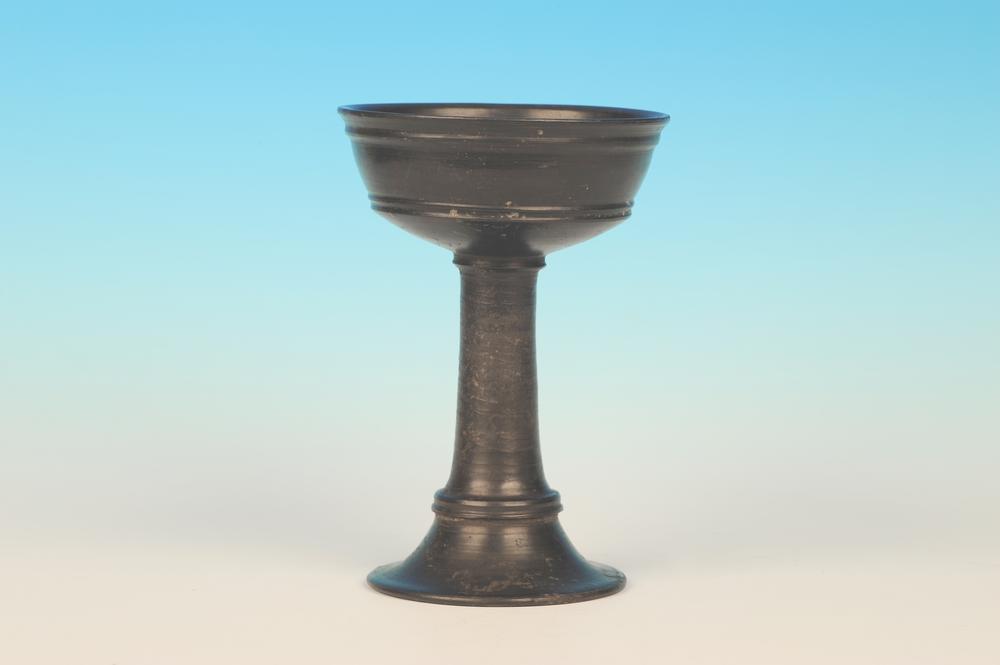 The chalice is a very popular shape in Etruscan pottery. When new this simply-decorated chalice’s shape and metal-like sheen would have made it an attractive purchase to those unable to afford actual, much more expensive, metal drinkware. [50.3.2] 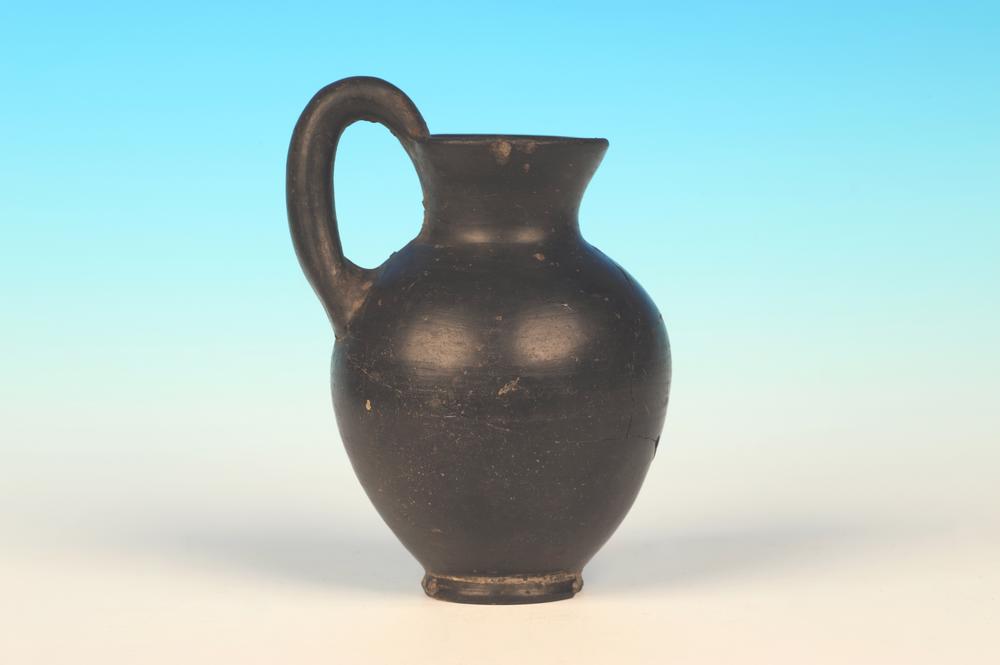 The olpe is a simple type of wine jug. Wine was drunk by all sections of Etruscan society, with taste and rarity dictating its price. The most prized were sweet white wines, with near vinegar-like reds being left to the poor and slaves. [50.4.6] 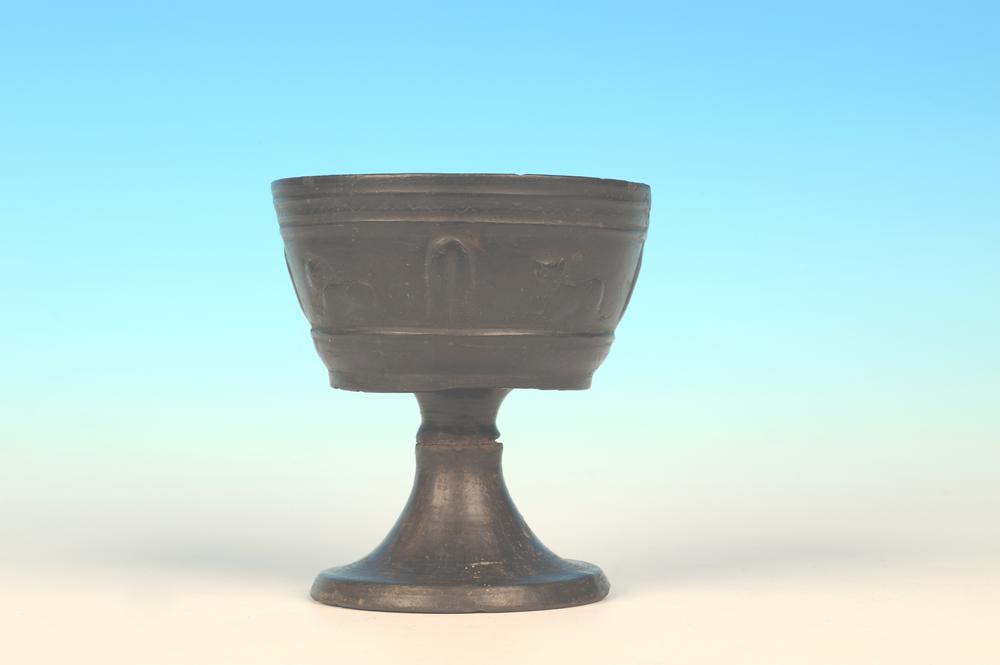 A decorated chalice with lions (not native to Italy but extremely popular subjects for Etruscan artists) and patterns in relief. The Etruscans had a well-established viniculture, producing wine for both domestic consumption and export. The region of Tuscany is still a major exporter of well-regarded wines. [53.8.2] 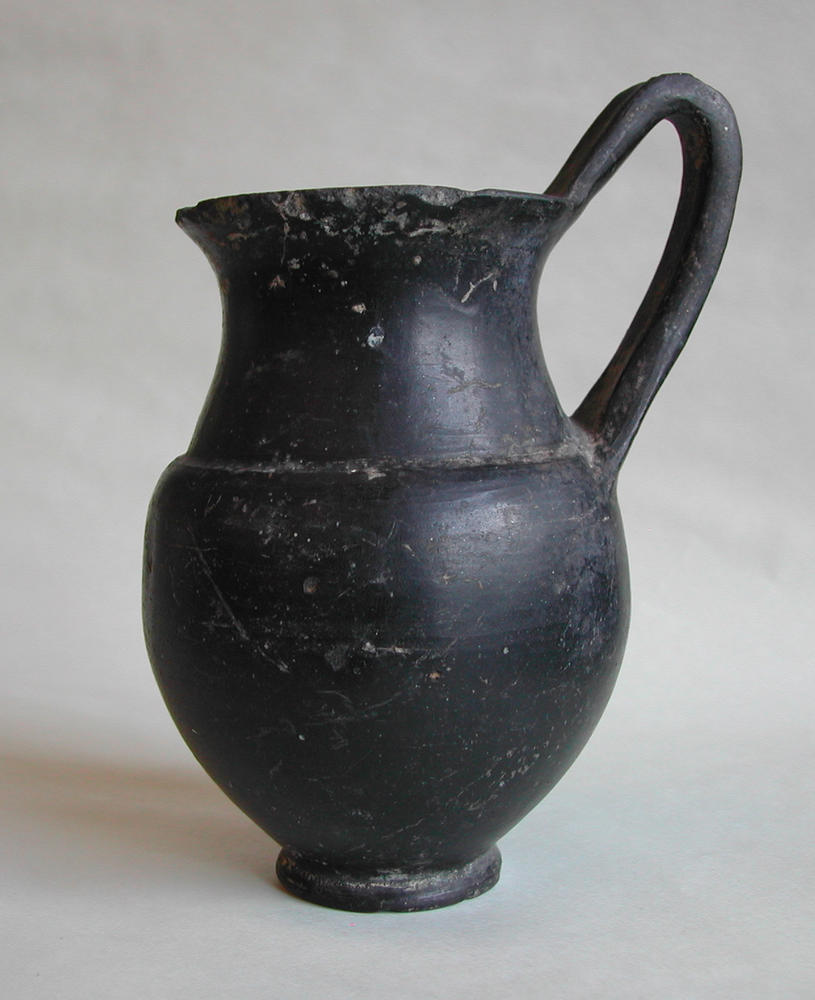 Shapes of pottery introduced from Greece before long evolved into uniquely Etruscan forms, like this olpe with a round body and concave neck. Wine jugs and cups played a major part in religious worship. The pouring of a libation of wine would have been a daily occurrence in many Etruscan households. [37.11.7] 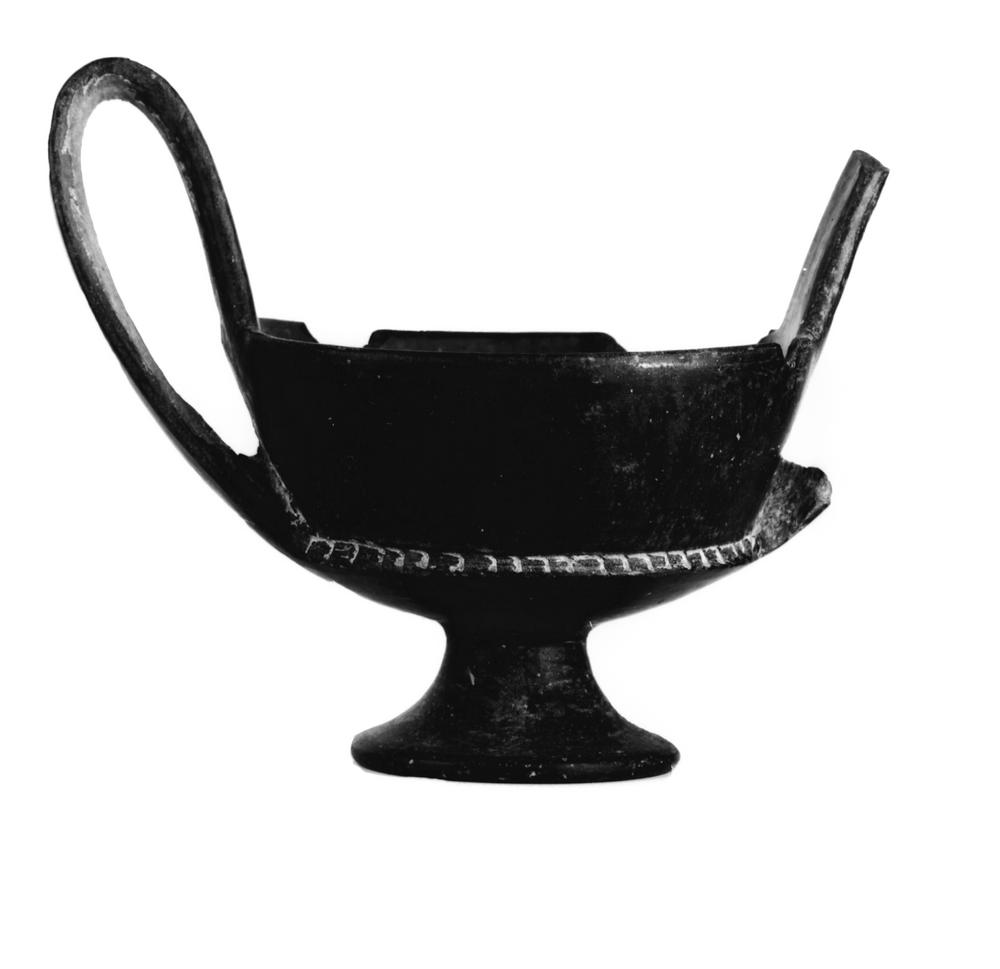 The kantharos is a shape imported from Greece (from the region of Boeotia). This cup would have been used in another Greek import, the symposion. Etruscan symposia were enjoyed by men and women alike — shocking to their Greek neighbours who would only have women present as slaves, musicians or dancers. [45.10.2] 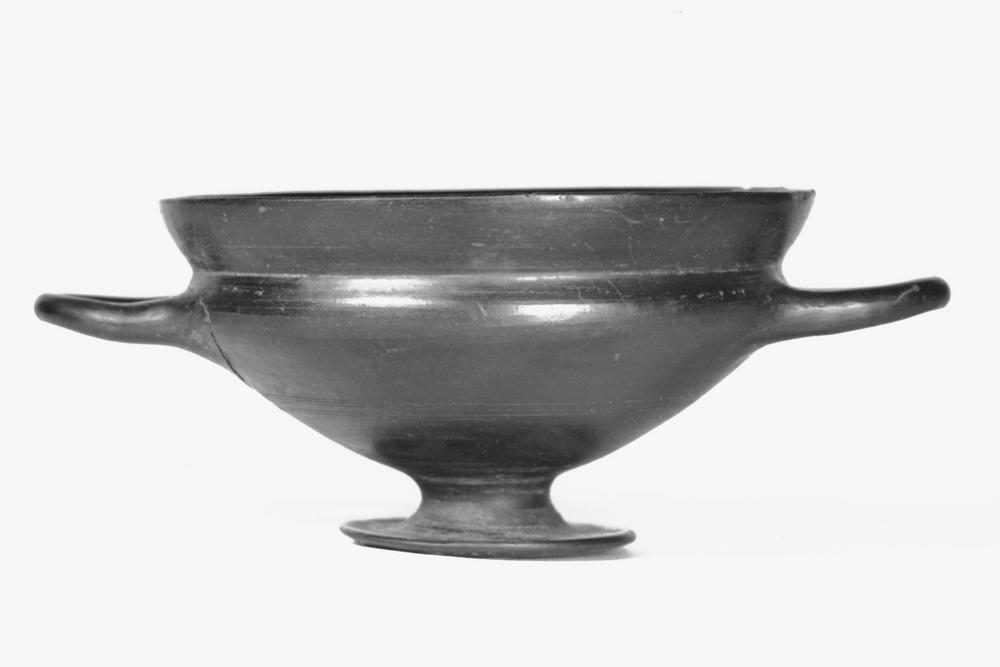 Another shape introduced from Greece, this item is just one example of the fusion of Greek and Etruscan fashions. The shape is termed Ionic after the location, Ionia (the central Aegean coast of Turkey), where it first became popular but it is made from Etruscan bucchero. [50.3.3] 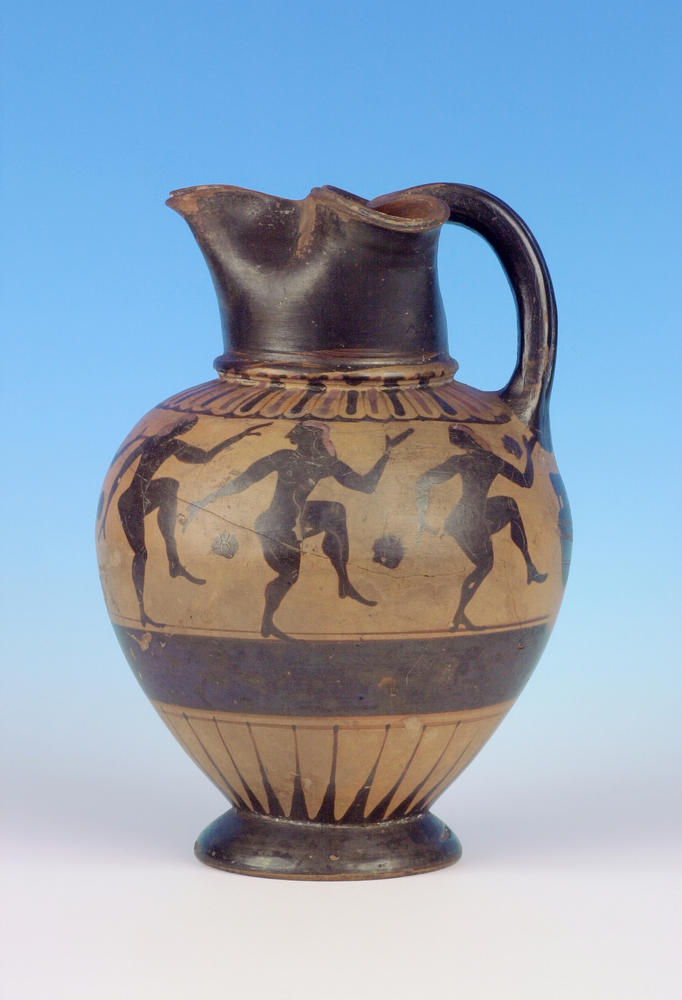 Featuring nude male youths dancing next to a krater, this jug is like the wall paintings found in Etruscan tombs. Greek and Roman writers considered the Etruscans immodest and shameless, concerned with only love and joy. [REDMG:1951.130.1] 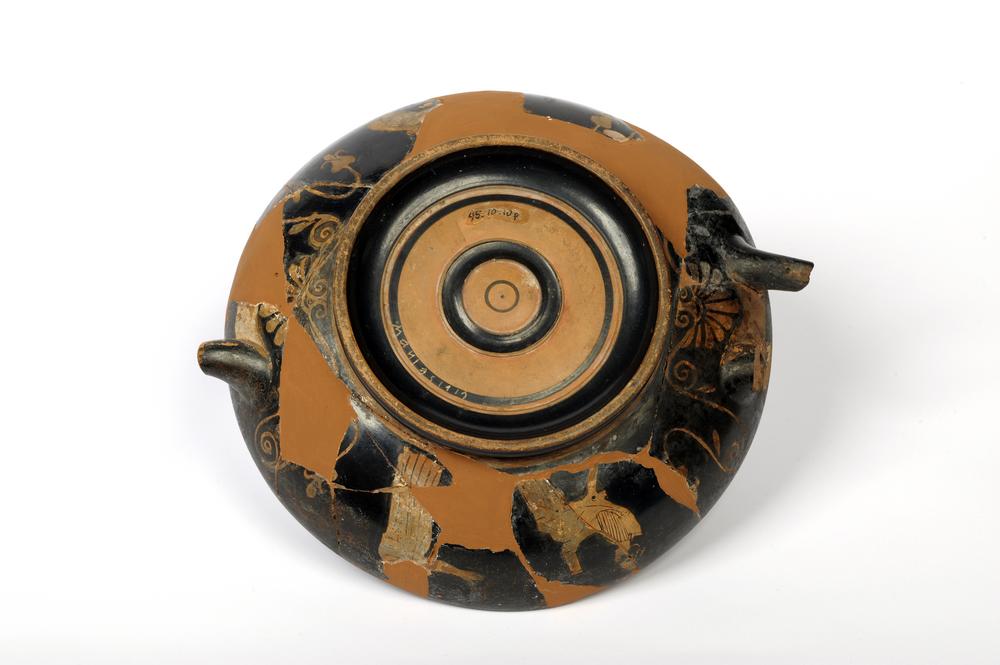 From the region of Greece home to Athens, Attica, this kylix (wine cup) has an inscription in Etruscan letters [see panel] on its base. Early Latin and other central Italian languages were also written using the Etruscan alphabet before developing their own characters. [45.10.10]