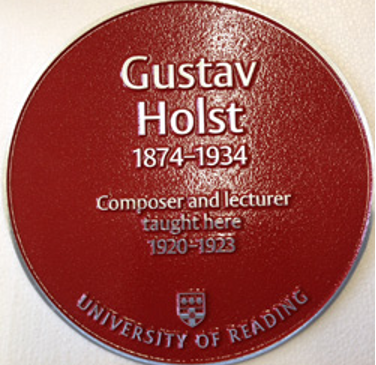 Although Gustav Holst only taught at Reading for a few years, his impact on his scholarship pupils there was long-lasting. The following paragraphs summarise their professional musical careers and illustrate his success as a teacher in identifying and nurturing talent regardless of his pupils’ previous educational opportunities, or lack thereof.

Reginald (John Mundy) Brind (1902–1988), like Holst himself, became an organist at a young age, in his case aged 13 at a church in Reading. After his studies with Holst at Reading he became a music teacher. His principal appointment was at Henley Grammar School, where he was music master from 1941–1969, during which time the choir and orchestra flourished under his direction. Initially he also taught at Chiltern Edge School. He was also organist at nearby St Peter’s Church Caversham and in retirement planned to continue giving piano and organ lessons. [1]

Douglas William Clarke (1893–1962) is not listed as one of Holst’s scholarship pupils, but is included here as a Reading pupil whose work Holst selected for college performance. Clarke was older than most of Holst’s Reading pupils, having first studied music there from 1909 to 1912.  After serving in the navy in World War I he returned to his studies, becoming a fellow of the Royal College of Organists in 1920 and gaining Cambridge University BMus and MA degrees, being appointed organ scholar at Christ’s College, Cambridge, in 1923. He moved to Canada in 1927, the year after his graduation, and became choral conductor and organist at Holy Trinity Church Winnipeg. His main academic appointment was as Dean of the Faculty of Music at McGill University in Montreal (1930–1955),  where his otherwise all-male composition students included the great composer and musician Violet Archer, who was granted a scholarship to study with Clarke and appreciated his musicianship, although not his approach to teaching. Clarke was also the conductor of the newly founded Montreal Orchestra, conducting it from 1930 to 1941, and encouraged his students to attend its concerts, which Archer did religiously, despite, as a woman, being ineligible to play in it.[2] As this was Montreal’s first professional orchestra, Clarke was able to introduce major symphonic works to the repertoire. In addition to performing music by British composers including Holst, who was a guest conductor in 1932, in 1940 the orchestra premiered Archer’s Scherzo Sinfonico, thus helping launch her long and distinguished career. The Montreal Orchestra also performed Clarke’s own Three Pieces in 1931, and his Piece for Full Orchestra in 1936. Clarke became a fellow of the Royal College of Music in 1933. On his retirement after presiding over a difficult period for the McGill Music Faculty in the early 1950s he married one of his former students, Octavia Wilson, returned to England and became organist of St Mary’s Church Warwick.[3]

William Probert-Jones (1896–1960) was another young organist, mentioned in the 1911 census as organist at Clifton Church and Union Workhouse in his native Ashbourne, Derbyshire, when he was living with his grandparents there aged 14. Having served in the army in World War I he was taught by Holst throughout his time at Reading, assisting him for the latter part of that time and succeeding Holst in 1923. He gained a doctorate in Music, and in 1937 was appointed Music Director at Bedford School, a post he held until his retirement 20 years later. Like Holst at James Allen’s Girls’ School in Dulwich, Probert-Jones taught a “whole school class” from the piano in the school hall. Choral and orchestral music flourished at Bedford during Probert-Jones’ tenure, and during the World War II years from 1941–45 there was the added excitement of Holst’s friend and conductor Adrian Boult and the BBC Symphony Orchestra taking over the school hall for rehearsals.

(Charles) Edmund Rubbra (1901–1986) started composing whilst still at school, where he was asked to write a hymn. Having left school at 14 to start work, initially in a firm of boot and shoe manufacturers, in 1920 he became one of Holst’s first Reading scholarship pupils, and as a prolific composer for the rest of his life is probably the most well-known. As well as having a major scholarship, on 13 July 1921 the Music Committee awarded Rubbra a college prize. Whilst teaching at Reading Holst also taught at the Royal College of Music, where he himself had studied as a scholarship pupil, and he encouraged Rubbra to apply for a scholarship there, which he did successfully. After serving in World War II, Rubbra’s main academic appointment was as lecturer at the newly-formed Oxford University Music Faculty and Fellow of Worcester College, Oxford 1947–1968. His many instrumental and vocal works include 11 symphonies and at the time of his death he was working on a 12th symphony.

Allan Bernard Sly (1907–1990) was a pupil at Reading School whilst being taught by Holst as one of his youngest Reading pupils, receiving several awards from the University College. The minutes of the Music Committee meeting for 12 July 1922 drew attention to his age, noting that he “would not reach the age of 16 till July 25, 1923”. He also studied with the celebrated pianist Evlyn Howard-Jones and composition with Benjamin Dale. In 1926 one of his compositions was performed by Sir Adrian Boult at the Royal College of Music, and in June 1927 he was awarded the Licentiateship of the Royal Academy of Music (LRAM) for piano performance. He subsequently emigrated and taught at the Toronto Conservatory of Music and several schools in Canada and the United States. In 1935 he joined the faculty of the experimental Black Mountain College in North Carolina as a music professor. He composed some of his most important works during his time at the college. In 1937 Sly became a US citizen and in 1939 resigned from Black Mountain College to become Associate Professor of Fine Arts at William and Mary College, Virginia. His musical career included organ and piano accompaniment performances, such as one at New York Town Hall in February 1952, and he made several recordings, including of Tumbleweeds by the American composer Ernst Bacon, with whom he had a long-lasting collaboration.

Gustav Holst’s teaching at Reading deserves to be remembered for far more than the incident when he fell over backwards whilst rehearsing his final student concert. It demonstrates his individualistic approach to encouraging the professional musicians of the future, the results of which were widespread in Canada and the United States as well as in England. His sensitive support for the young Edmund Rubbra helped nurture one of the most prolific of the next generation of English composers, and it is fitting that the widow of Rubbra’s friend and fellow composer Gerald Finzi chose Reading University as the recipient of Finzi’s 6,000-volume library. Holst himself was anxious that his composition pupils at Reading and the Royal College of Music should not feel they needed to produce imitations of his own music, varied in style though that was. As his composer daughter commented “he need not have worried, however, for he taught them to think for themselves, as well as to be practical.”[4]

Holst’s breakdown in health in 1923 led him to give up most of his teaching commitments, including at Reading. He continued to keep in close touch with several of his pupils, however. William Probert-Jones wrote: “He continued to take a great interest in the doings of the Music Department, and whenever I met him I had to give him a full account of all that was happening.” Today’s Music Education students at Reading have in Gustav Holst an inspiring role model for succeeding in their chosen careers.

[3] “Douglas Clarke” by Eric Mclean in the Canadian Encyclopedia https://www.thecanadianencyclopedia.ca/en/‌article/‌douglas-clarke-emc.