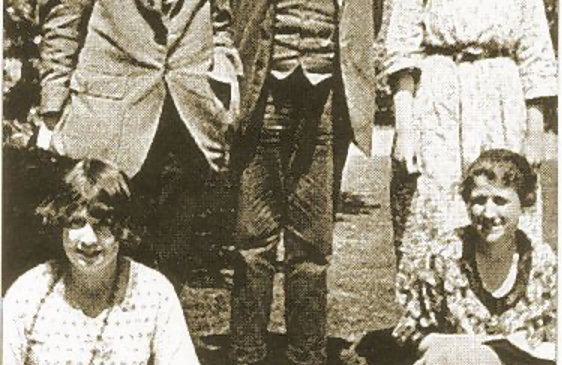 As a new generation of music education students start their careers at Reading University, it is a good time to recall that 100 years ago Gustav Holst (1874–1934), on the cusp of fame as the composer of The Planets Suite, joined the music department at the then University College Reading. In a series of blogs, Philippa Tudor reveals an insight into Holst’s teaching methods and the careers of some of the Reading students that he inspired.

For Holst’s family, and thus his early biographers, his activities and achievements at Reading were overshadowed by an incident in February 1923 when he lost his balance when conducting a rehearsal for his last concert in the university’s Great Hall. In slipping off the platform Holst fell onto the back of his head. The details of this mishap are hazy, the accident was not bad enough to stop the concert, and the Reading Archives shed no light on it. In contrast, they contain considerable detail about Holst’s impact on the musical life of the University College, about which there is much more to be told. This series of posts focuses on his success in identifying and nurturing the talent of his scholarship pupils. Whilst the best-known of Holst’s Reading pupils was the prolific composer Edmund Rubbra, all of his scholarship pupils went on to successful professional musical careers of their own.

Much of Holst’s previous teaching experience was at girls’ schools, and throughout his career he encouraged women musicians. It is therefore striking that although he taught women and men students at Reading, and under his direction women performed leading roles in the college orchestra, all his scholarship pupils there were men.

From the outset Holst was keen to spare his pupils some of the stresses of his own experience as an impoverished music student. He made this clear when accepting the offer of a post at Reading in a letter dated 29 February 1920:

“I thank you for your letter and shall have much pleasure in coming to University College for the first time on April 29. I presume that the orchestra will meet before the Choir.

I think I should be able to give a few composition lessons on Thursday afternoons but could not do much of this work before the autumn. My terms would be £6.6 per term. For actual composition as apart from harmony etc it might be better for each student to have one hour per fortnight and to attend another student’s lesson in the intervening week. This could be arranged later. We will start the choir with the music you mention.

I understand that I am to supervise the theory teaching generally. Would it be possible to meet the Principal earlier in the day and, after having seen him and you, to meet the other theory of music teachers?

Would you let me know as soon as possible about next autumn. I could keep the whole of Friday clear for Reading if I know in good time and this arrangement would suit me far better than any other.” [1]

Once in post, Holst quickly put his stamp on the teaching practices. At a meeting of the Music Committee which he attended on 14 July 1920 the awards of scholarships and exhibitions were agreed for the coming academic year, the largest of which, £28, went to Charles E. Rubbra for composition and pianoforte (“with Mr Holst and Miss Vincent”.) Edmund Rubbra was to become one of Holst’s most illustrious pupils. The other scholar whom Holst was due to teach in the 1920–21 academic year was thirteen-year-old Allan B. Sly, who was awarded a £14 pianoforte scholarship:

“on the understanding that his parents would pay the fee of £9. 9s. for the Session for a lesson in Composition from Mr Holst once a fortnight.” [2]

On 13 July 1921 the Music Committee agreed a new scholarship pupil to be taught by Holst, Reginald Brind, who was awarded £7 for Theory of Music lessons in Session 1921–22.[3] On 12 July 1922 it agreed that an exhibition of £7 in composition (with Mr Holst) should be granted to William Probert-Jones if any of the students awarded a scholarship or exhibition did not take it up.[4]

[2] Allan Sly was a pupil at Reading School whom the minutes of the Music Committee meeting for 12 July 1922 recorded “would not reach the age of 16 till July 25, 1923”. He went on to receive several more awards by the College.

[3] University of Reading Department of Music Minutes of Meetings of the Music Committee, volume II, pp 15–19.