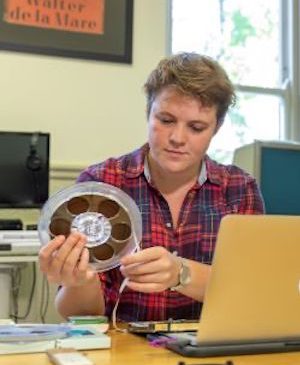 When we think of Samuel Beckett and an audio-visual collection, Shades for ‘The Lively Arts’ series, broadcast on Sunday 17 April 1977 on BBC 2, comes to mind. And yes, Ghost Trio, …but the clouds…, and Not I are all worth watching, but there are lots more hidden gems in the University of Reading’s Special Collections archive. For example, in one of the many boxes of VHS recordings, you’ll find Eh Joe. I don’t mean the Eh Joe with Jack MacGowran which was first broadcast on BBC 2 on 4 July 1966. Nor do I mean Elmar and Erika Tophoven’s German translation, He Joe (which was actually the first version to be televised on SDR to mark Beckett’s 60th birthday). No, I mean David Clark’s 1972 version with Patrick Magee and Elvi Hale, filmed at the University of London’s Audio-Visual Centre. This production is in colour, the curtains over the windows and door are red, and Joe is wearing a dark, chequered dressing gown!

For film lovers, the archive not only has Alan Schneider’s Film with Buster Keaton from 1965, but also David Clark’s 1979 full colour and sound version with Max Wall. This extraordinary recording takes a completely different approach to the original, and is well worth checking out. You can even look at Beckett’s mustard yellow ‘Film’ notebook (BC MS 1227/7/6/1) with his initial notes and diagrams, dated 5 April 1963.

Radio heads (no pun intended), you can hear Morton Feldman talking about how he and Beckett both hated opera in the introduction to Samuel Beckett: Words and Music, directed and produced by Everett Frost for the Beckett Festival of Radio Plays (first broadcast on NPR in the US on 13 April 1988). This series of Beckett’s radio drama also includes interviews with scholars such as Linda Ben-Zvi and Ruby Cohn.

The Reading archive contains a wealth of theatre materials. Not only does it hold several of Beckett’s production notebooks, Billie Whitelaw’s wonderfully colourful script for Not I, and Peter Snow’s model box for Peter Hall’s 1955 production of Waiting for Godot, but there are several video recordings of Beckett productions. Billie Whitelaw’s 1979 revival of Winnie with Leonard Fenton at the Royal Court (directed by Beckett) sits alongside a Czech production of Konec hry (Endgame) directed by Jan Nebeský, performed at the Komora Divadla Komedie, Prague in 1998. If it’s Czech productions you’re interested in, the interview with Vaclav Havel, for whom Beckett wrote Catastrophe, would be unmissable. A great afternoon can be spent watching a production whilst leafing through the programmes and notebooks from the stage files in the collection. 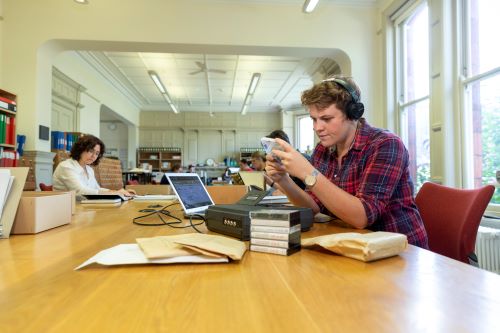 Even if you’re not a Beckettian and you’re just curious about the man himself, you can listen to Dr Geoffrey Thompson talk about his lifelong friendship with Beckett which started when they were teens at Portora Royal School. Thompson describes them reciting Keats and playing a game of chess in their minds as they went for walks together in Dublin. He then talks about the psychotherapy Beckett received in London, his connection with James Joyce in Paris, the challenges he faced during the war, and how his work is concerned with disability and immobility. There are also lots of wonderful documentaries on Beckett’s life and work, such as A Wake for Sam, first broadcast on the BBC during January 1990.

Having tempted you with footage of Beckett’s drama, film, and life, an overview of the Beckett audio-visual collection wouldn’t be complete without talking about Billie Whitelaw; the actor synonymous with Beckett’s drama. After a few hours spent watching Billie talk about and perform Beckett’s demanding roles, her directness and devotedness to the work becomes almost palpable. It’s amazing how sitting in the Special Collections reading room with the headphones on creates a direct connection with such a seemingly untouchable figure (I’m even calling her ‘Billie’!). One of my favourite cassettes is of Billie in conversation at a symposium at the University of Reading on 3 May 1994. She talks about Beckett’s insistence on the exact rhythms of her speech and the sheer difficulty of learning her part for Winnie in Happy Days. And she often breaks into freestyle, ad hoc performances! In another cassette from a chaired discussion at Reading, you can hear Beckett’s scenographer, Jocelyn Herbert, talk about how she came up with the idea for Billie’s costume for Footfalls (an item the collection also holds). There is even a documentary that follows Alan Schneider as he visits Billie Whitelaw at her home. This is their first meeting! The camera invites us to watch their conversations about and rehearsals for Rockaby, which later opened on 8 April 1981 at the State University of New York at Buffalo.

Above all, the best find has to be a cassette recording of Beckett’s own voice as he reads from Lessness, one of those impenetrable prose fragments. To hear Beckett’s soft, hushed voice recite the story whilst he taps out the rhythm of the piece with a pencil on a table top (as James Knowlson later told me) is an unforgettable moment for any Beckett enthusiast and researcher. It’s a moment when the archive really brings the work alive.

I have learnt so much about Beckett’s life, process, and collaboration with directors, actors, set designers (the list goes on…) as I’ve listened to the huge range of readings, radio drama, documentaries, and interviews at the Beckett Collection. It’s a real treat to both hear discussions and productions of Beckett’s work and examine his notebooks and typescripts. After going through the materials one by one, I’ve now written detailed descriptions of what you will find on the cassettes, DVDs, and VHS recordings. I’ve also cross-referenced these recordings with other items in the Beckett Collection so that you can investigate further connections throughout the archive. I’ve had a blast – I hope you will too.