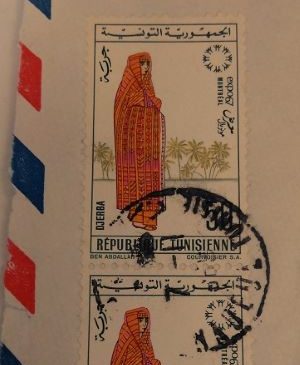 Written by Xander Ryan, graduate student in the Department of English Literature at the University of Reading

When Melanie Daiken moved to Paris in 1966 she wrote to Samuel Beckett, a friend of her father’s, telling him that she was on her way. He replied that he was happy to meet her, and gave her his preciously guarded phone number. During her musical studies at the Conservatoire over the next two years, which included being taught composition by Olivier Messiaen, Daiken and Beckett became friends. He took her out for smoked salmon and Muscadet, presumably an improvement on her usual student meals, and they discussed the libretto she was writing for her chamber opera Eusebius. She later sent him sheet music by Haydn and Schubert for his recreational piano playing.

The Samuel Beckett Collection archive holds approximately 25 letters and cards from Beckett to Melanie’s parents, Leslie and Lilyan Daiken, and 18 items of correspondence written to Melanie herself. Part of my recent placement at the University of Reading Special Collections, supported by the Arts and Humanities Research Council, was to transcribe and catalogue this correspondence, creating PDF handlists that would be available to researchers online.

The need to publicise this significant collection through a publicly available catalogue is partly evident in the fact that none of the letters are included in the publication The Letters of Samuel Beckett (2009-2016). This serves as a reminder that the editors of the Letters, as part of their enormous feat of editorial scholarship, had to carry out a rigorous selection process: only 20% of Beckett’s letters made the final cut.

Like most of Beckett’s correspondence, only his half of the exchange with Melanie Daiken has survived. The one exception, which I was delighted to come across when examining the documents, is a letter from Daiken to Beckett drafted on the back of one of Beckett’s envelopes. In the draft she writes to postpone their meeting, explaining that she is in bed with a cold, listening feverishly to her fellow students practising music next door.

Daiken went on to have a distinguished career as a composer and lecturer. She taught composition and contemporary music at the Royal Academy of Music and Goldsmith’s College, and her compositions were performed at the Wigmore Hall, Cheltenham Music Festival, and broadcast on BBC Radio Three. Her relationship with Beckett was an artistic connection as well as a friendship – her ironically-titled piece Gems of Erin (1975) was based on Beckett’s poems from Echo’s Bones and Other Precipitates. Another of her works, Quatre Poèmes (for piano, viola and clarinet, first performed in 1985), speaks not only of Beckett’s texts but also his biography, incorporating a French Resistance song in its coda.

Scholars are increasingly interested in Beckett’s legacy, not only his influence within drama and literature, but also in other artistic media. Derval Tubridy has lectured and written on Beckett and contemporary art, and Julie Bates is running a research project on contemporary Irish authors and their relationship to Beckett’s writing. Beckett’s connection with the music of Melanie Daiken, which she writes about compellingly in her essay Working with Beckett Texts (which appears in the publication Samuel Beckett and Music), demonstrates one musical aspect of this legacy. Their correspondence, housed in Reading’s Special Collections and newly catalogued, together with the rich resources of the Samuel Beckett Collection and the James and Elizabeth Knowlson Collection, provide a new avenue for readers and researchers to explore.

I am grateful for the support of the Arts and Humanities Research Council, administered through the South West and Wales Doctoral Training Partnership (SWW DTP) and its Student Development Fund.