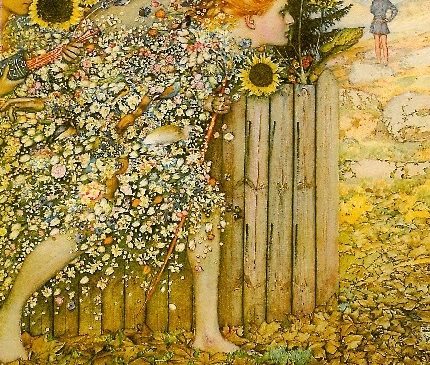 One of the most significant additions to our rare book collections in recent years has been a copy of a 1908 edition of The Romaunt of the Rose, which was purchased with assistance from Arts Council England/Victoria and Albert Museum Purchase Grant Fund and the Friends of the National Libraries.

This publication was the first book to be printed by the Florence Press, which was founded by the publisher Chatto & Windus to produce books of similar beauty to classic private presses, but in larger editions and at more accessible prices. Other fine quality editions produced under the Florence Press imprint included editions of Keats, Blake, Boccaccio and St Francis of Assisi.

This important acquisition complements the numerous examples of private press books and other fine printing in our rare book collections, and the Chatto & Windus archive, in which the book is mentioned specifically in correspondence and other records.

Due to differences between catalogue records, it is difficult to tell how many copies of the book exist in this country, but there appear to be only a small number. This copy is no. 7 of a limited edition of 12 printed on vellum. The Florence Press also produced an edition of 500 copies of the Romaunt printed on hand-made Aldwych paper, and we were pleased to acquire copy no. 129 of this paper edition as part of the purchase.

The Romaunt was one of the most important and influential poems of the Middle Ages, and is a partial translation into Middle English of a French allegorical poem, Le Roman de la Rose. It was first thought to have been the work of the English poet Geoffrey Chaucer, and while it is now questioned how much of the work is attributable to Chaucer, it is generally agreed that the first part was translated by him and that the poem influenced the poet’s later work.

Le Roman de la Rose was begun by the French scholar and poet Guillaume de Lorris in about 1230 in Old French and was continued forty years later by the author Jean de Meun. The poem begins with a description of an allegorical dream of courtly love, set in a walled garden, in which a courtier (the narrator) seeks to gain the affection of his beloved, a woman represented as the allegorical ‘Rose’, with its dual meaning as both a woman’s name and a flower. The courtier encounters other allegorical figures such as ‘Lady Reason’, ‘Daunger’ and ‘the God of Love’ who offer him advice on courtly love.

In the second fragment written by Meun, the poem takes on a more philosophical, satirical and sexual tone, as, in the story of the two lovers, ‘Rose’ is represented as less of an abstract ideal and becomes a real woman with sexual and physical reality. There are satirical attacks on women and marriage, courtly love and religious hypocrisy, represented by the allegorical figure of Fals-Semblant (False-seeming).

The publication features twenty exquisite colour plate illustrations, with ten by the Scottish painter, illustrator and war artist Keith Henderson (1883–1982) and ten by the artist, illustrator and theatre designer Norman Wilkinson of Four Oaks (1882 – 1934). Wilkinson adopted the suffix “of Four Oaks” to distinguish himself from a contemporary marine artist of the same name.

The illustrations are reminiscent in style of the early Pre-Raphaelites with their intense detail, colour and realism. Features and figures such as the striking image of the God of Love [see image above], wreathed and clothed in a swarm of tiny flowers, animals and birds, and the unusual compositions and poses of the figures in ‘The Daunce’ [see image above] give the images an intriguing, ethereal quality that perfectly illustrates, and brings to life, the dream world of the poem.

The two copies of The Romaunt of the Rose(PRINTING COLLECTION FOLIO–841.18-GUI) are available to view on request in the Special Collections Service reading room.

Images reproduced with permission from The Random House Group Ltd.

The Romaunt of the Rose manuscript and digitisation project at the University of Glasgow Library: http://www.memss.arts.gla.ac.uk/html/pilot.htm [accessed 10.02.2017]