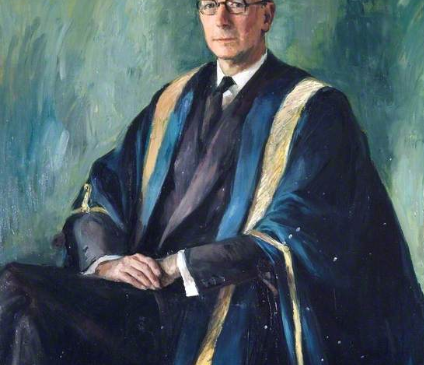 February marks LGBT History Month, and to celebrate it we’re exploring the man who laid the ground for more liberal attitudes to sexuality in Britain.

59 years ago John Wolfenden released a report which proposed that homosexual intercourse between consenting adults should be decriminalized. The uproar it produced in politics, the press and public discourse eventually helped pave the way for LGBT rights in the UK.

Lord Wolfenden,  Vice Chancellor of the University of Reading between 1950–1964 and future Director of the British Museum, was chosen to head the Departmental Committee on Homosexual Offences and Prostitution in 1954. After three years of consulting experts, they produced what was known as the Wolfenden Report. At its core was the principle that:

a person should be free to do or see what he wishes in the sexual sphere; he should also be free not to have what he objects to forced upon him.

The Report itself was punitive toward prostitution, but it was the second part on homosexuality which provoked the most debate in the press. The Sunday Express dubbed it a ‘pansies’ charter,’ the Evening Standard called it ‘bad, retrograde, and utterly to be condemned,’ while the Daily Mail categorizing its proposals as ‘legalized degradation.’

The report also had its advocates. A Roman Catholic priest of the time stated that ‘the community should not, in general, pry into a citizen’s private deeds – even when they are misdeeds.’ The Times editorialized that ‘adult sexual behaviour not involving minors, divorce, fraud, or public indecency belongs to the realm of private conduct, not of criminal law.’

Such was the interest provoked by the subject in the Sunday Timesthat they separately published its article with a selection of accompanying letters. The wide range of opinion in these letters bely the beginnings of the cultural shift that would culminate in the moral revolutions of the 1960s.

The fact that it took another ten years for the Wolfenden Report’s proposals were adopted, however, certainly says something about Britain at that time. Despite his own son being homosexual, Wolfenden always admitted that he was no crusader for homosexual rights, stating:

My job was to chair a committee, present the findings to the government, and then ‘it’s over to you, mate,’ I thought.

Indeed, it was not for lack of scientific evidence that homosexuality was punished in 20th century Britain, but because of a complex legacy of persecution, puritanism and myth. For instance, the committee found ‘no evidence for the view that such conduct is the cause of the demoralisation and decay of civilizations.’ They also dismissed the ‘concept of homosexuality as a disease. On the criterion of symptoms, it is often the only one associated with full mental health in other respects.’

Wolfenden admitted in later years that his Report was ahead of public opinion, though he thought the government could have been bolder in implementing its recommendations. Indeed, by today’s standards the Report does not go far enough. For one, it ignores female homosexuality entirely, and it was later criticized as treating homosexuality as basically immoral and wrong, just not illegal.

As we look back over the past 59 years we can track the painfully slow progress of LGBT civil rights. The Sexual Offences Act decriminalized homosexuality in 1967, and in 1994 the Criminal Justice and Public Order Act lowered the age of consent to 18, and then to 16 in 2001. Relationships between LGBT people was given a boost in 2004 with the Civil Partnership Act, and marriage was legalised in 2013.

Many now see the position of transsexuals and others on the wide spectrum of sexuality as similar to what homosexuals experienced in the early-mid-twentieth century. What was necessary in 1954 was for someone to collect the evidence, confront prejudice and stir the pot. The Wolfenden Report certainly did that.

This blog was researched using records on Lord Wolfenden held by the University of Reading Special Collections. You can find this material on our catalogue.