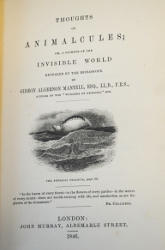 We recently made quite a discovery in Special Collections – a book that had once belonged to Mary Shelley. Shelley’s gothic masterpiece Frankenstein: or, The Modern Prometheus is arguably more popular than ever and is still inspiring films such as the latest Victor Frankenstein which was released last year starring James McAvoy and Daniel Radcliffe.

However, the book in question is based on much firmer scientific principles. It is the geologist Gideon Mantell’s Thoughts on Animalcules: or, A glimpse of the invisible world revealed by the microscope (1846), Reserve–593-MAN. Special Collections actually has two copies of this book, one in Reserve and one in the Cole Library and the discovery was made during a duplicate check. Mantell was a Sussex doctor but became famous as a pioneering palaeontologist and one of the first people in the world to study dinosaur fossils. At first Mantell and Shelley may seem an unlikely couple but through shared interests, ill-health and ultimately location they became well acquainted.

The link that first brought them into contact was Mantell’s interest in poetry including that of Percy Shelley, Mary’s husband who had died tragically in 1822. Mantell was good friends with Horace Smith who was among the group that bought Mantell an Iguanadon fossil in Maidstone in 1834 which is still on display at the Natural History Museum. Smith had been a friend of Percy, and had given Mantell one of Percy’s letters for his autograph collection. Mary’s first correspondence with Mantell began in 1839 as she was compiling an edition of Percy’s letters and asked Mantell if she could see the one in his collection. Strangely Mantell lied and said that the letter had gone with his son, who had emigrated to New Zealand. Despite this he did give Mary copies of some of his recent works with Mary replying that “The books are delightful”.

No further correspondence took place but eventually the two were brought together once again, this time geographically. Mantell had moved to London at No. 19 Chester Square, Pimlico in 1844, coincidentally Mary bought 24 Chester Square in 1846. It was in this year that their friendship developed which culminated in the gift of Thoughts on Animalcules. Their first documented meeting was in March 1846, Mantell “being sent for to Mrs Shelley” who was “very ill from neuralgia of the heart”. In January, Mantell had been suffering from “severe pain from neuralgia of the right leg”, and on top of this, a spinal injury following a carriage accident in 1841 was made worse by a fall in July. There are further diary entries relating to meetings with Mary in June, October and December.

The book was sent on 4th January 1847 as a New Year present, Mantell’s inscription to Mary is as follows “To Mrs. Shelley with the highest regards of the author, January 1. 1847.” The most likely reason for Mantell’s gift was that the book has a section from Percy’s Queen Mab opposite the preface. This was one of Shelley’s most controversial poems and when it was published by Edward Moxon in his Poetical Works (1839) edited by Mary (a copy of which is in our Matthews/Shelley Collection) the references to atheism were removed.

Sadly it seems that Mantell saw Mary much less after she had received the book. Notably, when Mantell records news of Mary’s death in 1851 she is “Mrs Shelley the relic of Percy Bysshe Shelley the poet”. Instead of writing “relict”, an archaic word meaning widow, Mantell’s use of “relic” and his constant references to her husband have led scholars such as Dennis Dean to conclude that “Mary meant more to him as memorabilia than as a person.” Their only other meeting recorded in his diary after 1846 was in July 1848 when, “Mrs Shelley (widow of Percy Bysshe Shelley) called & gossiped with me” as they had on Halloween in 1846. It is true that Mantell’s diary entries show him becoming increasingly tired, frustrated, and in pain throughout 1846, yet his visits to Mary must have been something of a light relief.

The journal of Gideon Mantell, surgeon and geologist: covering the years 1818-1852, edited with an introduction and notes by E. Cecil Curwen (1940)

The Unpublished Journal of Gideon Mantell: 1819 – 1852, edited with an introduction by John A. Cooper (2010) accessed at http://brightonmuseums.co.uk/discover/wp-content/uploads/sites/7/2014/11/mantell_journal.pdf