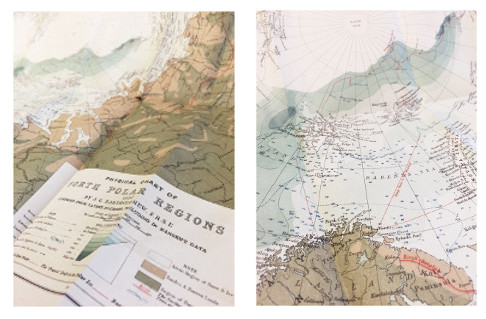 In honour of Christmas and the annual travels of Santa Claus, this week’s Travel Thursday features an expedition to the North Pole!

The explorer in question is Fridtjof Nansen; scientist, adventurer and humanitarian who was awarded the Noble Peace Prize in 1922.  Having previously survived a dangerous trek across the uncharted interior of Greenland in 1888, Nansen was keen to further explore the arctic regions and set out in 1893 with his strong and cleverly designed ship the ‘Fram’.  Sailing into the ice pack off Siberia, the Fram re-emerged 35 months later without its lead explorer.

Intending to reach the North Pole, Nansen and one companion had departed from the crew with, “thirty days’ rations for twenty-eight dogs, three sledges, two kayaks, and a hundred days’ rations for themselves,” (The Nobel Foundation, 1922).   Although they covered only 140 of the 400 miles to the Pole, they reached closer than anyone had previous achieved.

The two volume, “Farthest North : being the record of a voyage of exploration of the ship “Fram” 1893-96 and of a fifteen months’ sleigh journey”, published in 1897 features Nansen’s personal diary of the journey, alongside his beautiful sketches of the landscapes and events along the way.

Nansen’s journal provides a fascinating insight to life in the far north, including descriptions of the beautiful aurora borealis, dangerous encounters with polar bears and a slightly more humorous first attempt at driving a dog sledge:

Having harnessed the dogs to the Samoyede sledge, the animals promptly took off at lightning speed and ran dizzying rings around the ship.

I got out and tried to hold the sledge back, but was pulled off my feet and dragged merrily over the ice in my smooth sealskin breeches, on back, stomach, side, just as it happened.

In the end, Nansen loses the sledge seat, his whip, gloves, cap and his temper…not to mention his dignity…

I inwardly congratulated myself that my feats had been unobserved.

On Christmas Day, Monday 25th December, Nansen records a chilly temperature of -36 °F (-38 °C) and recounts how he took a beautiful moonlit walk – only to have his leg go straight through a crack in the ice -completely soaking him.  However, his Christmas dinner more than made up for the accident:

He ended his Christmas, with some card-playing, reading books and…

then a good sound sleep-what more could one wish?