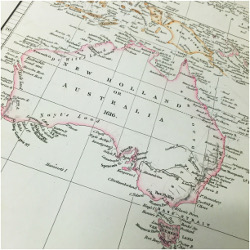 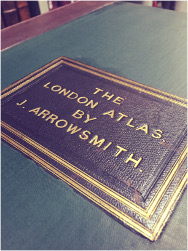 Born in 1790 in County Durham, John Arrowsmith moved to London at the age of 20 to work under the tutelage of his uncle, Aaron Arrowsmith, a cartographer known for his outstanding accuracy.  Having learned the arts of map making, engraving, and printing, Arrowsmith set up his own business in 1824 and ten years later established his reputation with the ‘London Atlas of Universal Geography’.

A beautiful tome, hand-coloured and created with original materials, ‘The London Atlas’ was considered to be the best large scale atlas available at that time.  Below is a 1842 edition, which was designed with useful tabbed pages: 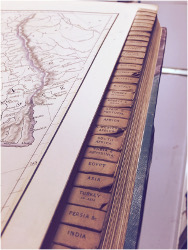 The original atlas consisted of 50 plates of maps but Arrowsmith regularly added to the collection and as such there is no firm collation for any edition.  However, this does mean that the later editions are especially important as they include a greater number of maps, particularly of countries such as Australia.

In ‘The London Atlas’ Arrowsmith states that in the creation of the atlas he examined more than ‘ten thousand sheets of printed maps’, gained insights from surveys and also drew on the knowledge of travellers who ‘were particularly acquainted with the districts.’  Indeed, Arrowsmith was friend to a number of explorers and was often responsible for converting their sketched out drawings and surveys into more accurate maps.  This example from Livingstone’s ‘Narrative of the Expedition to the Zambesi’ shows a map created by Arrowsmith in 1865 that was based n the ‘Astronomical observations and skecthes’ of the explorer:

The explorers showed their appreciation of his work by naming after him mountains, plains, and lakes in Australia, New Zealand, and Canada.

In 1830, Arrowsmith helped found the Royal Geographical Society and was awarded the society’s Patron Medal in 1862 for his outstanding contributions to the field.