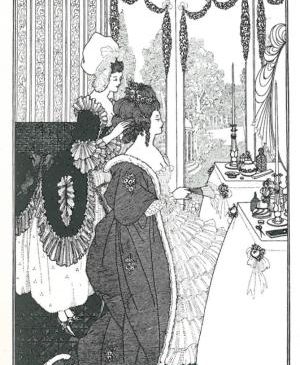 I’m Fiona Melhuish, and in my work with the Special Collections rare books I get lots of opportunities to spotlight my favourite items from our wonderful book collections through our Featured Items on the Special Collections website. One of these include an edition of Oscar Wilde’s play Salome, with illustrations by Aubrey Beardsley, and for my first ‘Favourite Find’, I would like to focus on another of Beardsley’s masterpieces, his illustrations for The rape of the lock : an heroi-comical poem in five cantos by Alexander Pope. This small book, measuring 14.3 cm high, was published in London by Leonard Smithers in 1897, three years after Elkin Mathews & John Lane published Salome. It is a copy of the miniature ‘bijou’ edition of the book that Smithers had first published in 1896, and is one of 1000 copies printed on art paper.

Aubrey Beardsley was born in 1872 and died from tuberculosis in 1898 at the age of only twenty-five. He completed the ten Rape of the Lock drawings and a cover design for the first edition in just a few months despite his increasingly poor health. During his short and brilliant career he became notorious for his illustrations in two ‘decadent’ periodicals of the period, The Yellow Book and The Savoy. His designs and illustrations for books such as Le Morte D’arthur, Lysistrata, Salome and Volpone added to his notoriety as the most daring artist of the 1890s.

The exquisite illustrations for The Rape of the Lock, considered by many critics to be among Beardsley’s finest work, are almost like pieces of intricate needlework in their delicate rendering of line, texture and pattern. It is appropriate that the title page should credit the illustrations as having been “embroidered … by Aubrey Beardsley”. Close examination of the drawings also reveals that they are full of Beardsley’s mischievous wit, especially in his use of sexual imagery, and demonstrate his flair for satire, features which are characteristic of much of Beardsley’s art.

Beardsley produced the illustrations in the style of eighteenth-century engravings, inspired by the French rococo style. The drawings are photoengravings, drawn on paper and then photographed directly onto the wood block, enabling the artist to make his drawing in any size he wanted since it could then be reduced by photography to the dimensions required for the publication. The eminent American artist James McNeill Whistler, who was known to dislike Beardsley’s work, was forced to change his opinion when shown a portfolio of The Rape of the Lock drawings by Beardsley himself, declaring that “Aubrey, I have made a very great mistake – you are a very great artist” whereupon Beardsley, overcome by the unexpected praise, burst into tears. Even Punch magazine, who had ridiculed the artist as ‘Aubrey Beardsley-Weirdsley’ because of his taste for the grotesque, came close to praise when it described The Rape of the Lock as “a dainty curiosity”.

Pope’s narrative poem was first published in 1712 and then later revised, expanded and reissued, appearing in its final form in 1717. The poem, a satire on contemporary society, centres on a ‘storm in a teacup’ incident of a theft of a lock of hair from the character of Belinda by her suitor, the Baron. The triviality of the incident is emphasised by Pope’s use of the formal and elaborate structure of a classical epic poem. The story was based on an actual incident recounted by Pope’s friend, John Caryll.

This book is one of a number of publications illustrated by Beardsley held in the University rare book collections. Other books include his illustrated edition of Ben Jonson’s Volpone (1898) and Under the Hill (1904), as well as a number of volumes of The Savoy and The Yellow Book. The University archives also hold correspondence and personal papers relating to Beardsley, which include family photographs. There are also a number of archive collections relating to other figures of the 1890s period, including Lord Alfred Douglas, W.B. Yeats, Oscar Wilde (in the Sherard papers), and the publishers John Lane and Charles Elkin Mathews.