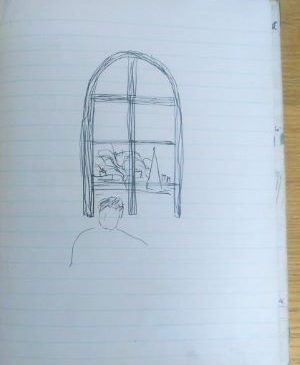 Written by Xander Ryan, graduate student in the Department of English Literature at the University of Reading.

Amongst the rich holdings of the Samuel Beckett Collection archives are the notebooks of Leslie Daiken. He was born Leslie Herbert Yodaiken in 1912 to Irish-Russian parents, part of the Jewish community centred around the ‘Little Jerusalem’ area of Dublin. After attending Presbyterian and Methodist schools, Daiken went to Trinity College Dublin (TCD) in 1930 to study for a Modern Languages and Literature degree. Known to his university friends as ‘Yod’, he started publishing under the name Daiken in the mid-1930s. One of the lecturers he encountered at TCD was the young Samuel Beckett. Beckett lectured in French Literature for four terms from 1930, before abruptly resigning via telegram from Germany in January 1932, safely distant from the protests of family and colleagues. The existence of Daiken’s handwritten notes on Beckett’s lectures led the University of Reading to acquire the notebooks – the documents provide evidence of Beckett’s pronouncements on authors such as Racine and André Gide, giving new insights into this pivotal decade in his intellectual and creative development.

The aim of my placement at the University of Reading Special Collections was to catalogue Daiken’s notebooks and Beckett’s letters to the Daiken family. I worked with Sharon Maxwell, Cataloguing and Projects Archivist, to re-package the documents, ensuring they are conserved for future generations. Like many archives of this breadth and depth, there are corners which have been explored only by a handful of scholars. With renewed recent interest in Beckett’s reading habits and intellectual networks, not to mention the forthcoming volume on ‘Beckett and Pedagogy’ from the Journal of Beckett Studies, it was an opportune moment to conserve the notebooks and to catalogue them in more detail.

The placement was made possible by the support of the Arts and Humanities Research Council, in the form of the South West and Wales Doctoral Training Partnership (SWW DTP) and its Student Development Fund. It has been a great opportunity to use the knowledge gained from my PhD research to create a public-facing resource, gaining experience in the libraries and archives sector and learning new professional skills. The placement helped to strengthen the link between the SWW DTP, the Beckett International Foundation and the Samuel Beckett Collection, one of the most valuable resources connected to the consortium universities and a cornerstone of Beckett studies around the world.

The thirteen notebooks are extraordinary objects, in part through their stubborn ordinariness. Nine of them are grey-coloured hardbacks, made by Hodges Figgis bookshop in Dublin, with TCD insignia stamped on the front cover. Daiken’s notes range from carefully drawn geometry exercises to translations of Provençal and Gaelic poetry. Together with approximately 35 TCD past exam papers, the notebooks provide a fascinating cross-section of an undergraduate’s education in the 1930s. Alongside Daiken’s academic work the notebooks contain material of a more personal nature, including Daiken’s poems, his political notes, doodles [see images above and below], and even a shopping list. The political content is especially interesting given that in the mid-1930s Daiken moved to London and joined several radical left-wing networks, editing the Irish Front with Charlie Donnelly and taking part in the Republican Congress, a broad coalition of Irish republicans, socialists, and anti-fascists. Daiken’s politics have recently caught scholarly attention – Katrina Goldstone’s work on him includes chapters in ‘Studies in Irish Radical Leadership: Lives on the Left’ (2016), and ‘Reimagining the Jews of Ireland: Historiography, Identity and Representation’ (forthcoming in 2020).

Amongst the notebook poems is one piece about a street brawl between gangs of school-age boys in Dublin. A group of Irish-Jewish students fight a rival gang of non-Jewish youths after finishing Hebrew class for the day, the ‘fists only’ rule quickly disappearing as rocks and golf balls begin to fly. Daiken’s creative response to his childhood memories, corroborated by Con Leventhal’s account of the time, found further expression in later life when he wrote the radio play ‘The Circular Road’. Broadcast on the BBC in 1960 and on RTÉ in 1962, this moving and sophisticated work focuses on a young Jewish boy whose father was shot during the Civil War. Daiken’s play weaves together a cast of characters and a complex soundscape to depict the boy’s experience of intermixed cultures and heritage. Daiken married Lilyan Adams in 1944 and they settled in London, raising two daughters, Melanie and Elinor. When Beckett passed through London in August 1945, in the final month of World War Two, he gave Daiken a manuscript of his novel ‘Watt’ with which to approach publishers. Their friendship deepened in the late 1950s when they visited each other in London and Paris, Beckett sometimes helping the Daikens with air fares whilst they supplied him with Powers Irish Whiskey. Two years after Daiken’s untimely death in 1964, his daughter Melanie moved to Paris to study music, re-establishing contact with Beckett and becoming friends with him herself. The letters from Beckett to members of the Daiken family comprise the second half of the Daiken Collection in Reading’s Beckett Collection, and will be the subject of a second blog post.

The notebooks provide a wealth of information for readers interested in a range of topics, including Beckett studies, pedagogy, diasporic republicanism, international socialism, and the history of Jewish refugees in Ireland. They demonstrate the diverse curiosity of Daiken’s mind, a quality no doubt important to his later friendship with his former lecturer. Inside the front cover of the tenth notebook Daiken writes a frugal shopping list, including vital items such as radishes. Decades later this found an unwitting echo in Beckett’s short prose text, ‘Enough’. The speaker tells us ‘What do I know of man’s destiny? I could tell you more about radishes. For them he had a fondness.’ I’m very grateful to Elinor Papadopoulos (née Daiken) for permission to quote from her father’s notebooks and to reproduce images of them in this blog post.