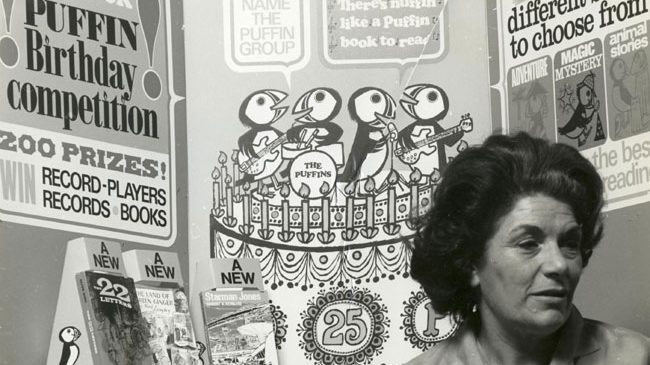 This was the title of a recent seminar given as part of the English Departments’s latest Archives & Text series which I attended with volunteers Kaye Gough and Ann Livingstone. Kaye is involved in a multitude of volunteering activities with MERL and the Special Collections. In this post she gives us her thoughts on a fascinating and lively seminar discussing the role of women in children’s publishing.

This seminar was presented by Dr Lucy Pearson, Lecturer in Children’s Literature at the University of Newcastle, whose recent book ‘The Making of Modern Children’s Literature in Britain’ covers publishing and criticism in the 1960’s & 1970’s.  Lucy’s focus here was on the growing impact of the lady editor on published literature for children during the 1940’s to 1970’s and in particular that of Kaye Webb.

In the early days many were viewed as ‘dessicated spinsters’; educated women working for pin money or in secretarial and administration roles helping to oil the wheels of the business, their actual contribution unrecognised. Then some professional women editors and authors, with prior media experience arrived on the scene such as Grace Hogarth and Eleanor Graham who began to introduce better quality children’s literature and to make a positive difference.  Despite the knowledge they brought to their positions and the impact they had, it is perhaps only in retrospect that their contribution to children’s publishing has been identified.  However, it was Kaye Webb, who implied that it was through social networking, ‘we met at a party’, that she obtained her job at Puffin.  In fact she was a talented woman who cleverly utilised her femininity and personality to achieve her aims.  Disguised underneath that facade there lurked a shrewd businesswoman with marketing flair who successfully launched the Puffin Club, introduced new authors and welcomed a whole generation of children to reading.

During this seminar, I reflected on how women’s job opportunities have improved since that time. When in the late 1960’s I joined the hotel  and travel industry there were no female sales managers, chefs or hotel managers and a secretarial or administrative role was generally the only way into the business. We were only expected to be support staff to the management i.e. Men! Educated to be either teachers and nurses or simply secretaries or dare I say – housewives!

We have been left a positive legacy in children’s publishing from the lady editors Lucy covered in her seminar. Some may have started out in positions beneath their competence or were not seen as serious contenders for a key role in publishing, despite their obvious qualifications and capabilities. However, once through the door, these women were to have a major impact in generating a new and more significant department within publishing as well as enriching children’s literature.

Photograph of Kaye Webb reproduced with the permission of Seven Stories National Centre for Children’s Books. You can find out more about the Kaye Webb collection at Seven Stories here. BBC Radio 4 is running a second series of ‘Publishing lives‘ this week, aired at 13:45 each day. Kaye Webb was the subject of Monday’s programme and today we see Norah Smallwood in the spotlight. Smallwood rose from publisher’s secretary to board member at The Hogarth Press and Chatto & Windus. The archives of these publishing firms are held here in the Special Collections on deposit from Random House. Norah Smallwood’s letters can be found in among the files of editorial and business correspondence.