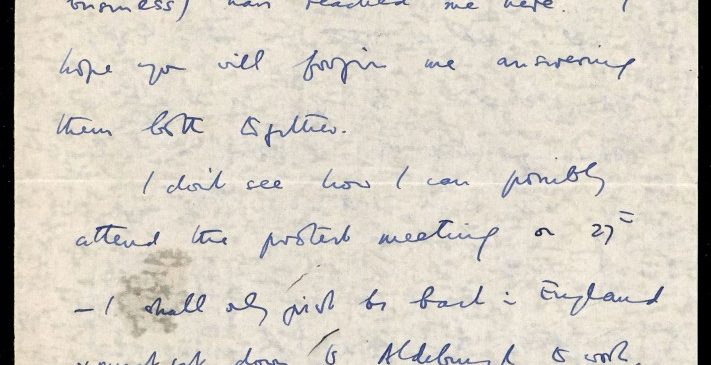 Brian Ryder is one of our volunteers here at Special Collections. Brian’s history with Reading collections is a long one; he used to be one of our project cataloguers and is now working his way through the Routledge & Kegan Paul archive.

On March 13th 1952 the composer Benjamin Britten (1913-1976) – on holiday in Austria – replied to two letters from Herbert Read (1893-1968) which had been sent on to him from his home in Aldeburgh. Read’s first letter came from the publisher Routledge & Kegan Paul, where Read was a director, and mentioned the possibility of meeting for lunch to discuss an idea of Britten’s for a book he was contemplating writing (carbon copy on file RKP 1951-1952 BER-BRO held in the Routledge archive, Special Collections Service, University of Reading).

The second letter letter holds more personal interest. It came from Read the anarchist rather than Read the publisher and, unlike Britten’s reply, was not lodged in the company’s files. The two men had known each other for some years and had been founding members of the Freedom Defence Committee, of which Read was chairman. Active from 1945 to 1949, its aim had been to ‘defend the civil liberties of all citizens’.

Benjamin Britten’s reply to this second letter implied that it had contained an invitation to attend a public meeting, and he responded as follows:

‘I don’t see how I can possibly attend the protest meeting on 27th – I shall only just be back in England & must get down to Aldeburgh to work. But any message of mine, which may be useful to read out, I wish you would use – you know how interested I am, & how much I regret not being present personally to show my indignation.’

The last few words of this passage had been lightly underlined with a coloured crayon, presumably by Read with the idea that he might relay them to the meeting.

The protest concerned the assassination of five Spanish anarchists by Franco’s agents. A leaflet protesting at these executions reports that a large public meeting entitled ‘An appeal to the public conscience’ had been held in London on March 27 1952 at which the speakers included Herbert Read.  Read remained heavily involved in the anarchist movement, although he accepted a knighthood in 1953, and his writings on politics, art and culture totalled over 1,000 titles.