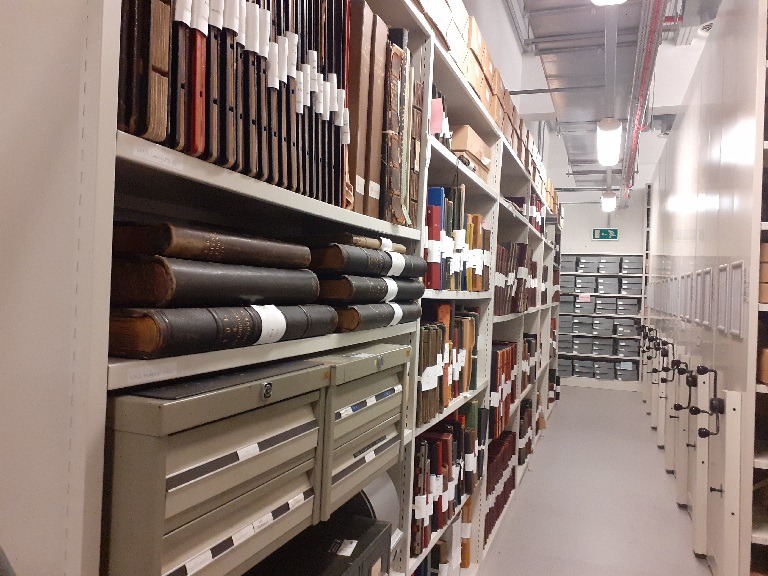 Henry Walton Smith (1738-1792) and his wife Anna Smith (nee Eastaugh, c.1756-1816) first established a newsvendor’s business in around 1790 in Little Grosvenor Street, London.  Upon Henry’s death in 1792, Anna took control of the business and partnered with Zaccheus Coates until 1812, whereupon Coates was replaced by Anna’s son William Henry Smith (1792-1865, the first W.H. Smith). The latter inherited the business, along with his brother Henry Edward Smith (1787-1846), on the death of their mother. In 1820, the business took its first steps in newspaper wholesale distribution. Henry Edward Smith left the partnership in 1828, and at this point the name “W.H. Smith” came into use.  By 1848, the business had expanded and began opening new stands in railway stations, starting at Euston station in London; by 1850, Smith’s had opened stands in Birmingham, Manchester, and Liverpool stations. In 1855, the first bookstall contract was established with the North London Railway; advertising contracts with the South Eastern Railway were also obtained.

The first W.H. Smith retired in 1857, leaving the business to his son, also named William Henry Smith (1825-1891), who renamed the company W.H. Smith & Son. The business continued to acquire new railway bookstall contracts and to renew existing ones. By 1860, Smith’s had introduced lending libraries at their railway bookstalls and established a library department in their London head office; this practice continued until 1961.

Throughout the late 19th century, Smith & Son began to build up its newspaper wholesale operations nationwide; dedicated newspaper trains were introduced in 1875 to enhance the efficiency of newspaper distribution. In 1860, a Printing Department was also established. From 1862 to 1881, Smith’s published the “Select Library of Fiction” (a series of fiction books aimed at travellers known as the “Yellowbacks”), in collaboration with Chapman & Hall; in 1883, the decision was made to move out of publishing.

In 1862, the second W.H. Smith stepped back from the partnership to concentrate on his political career, bringing in William Lethbridge (1825-1901), who became a partner in 1864. Several provisions were made for staff welfare: in 1867, a bonus scheme was started and this was followed by a savings scheme in 1880, a staff building society in 1882, a superannuation fund in 1894 (for clerical staff), and a pension fund in 1895 (for non-clericals).

After the death of the second W.H. Smith in 1891, his son William Frederick Danvers Smith (later Second Viscount Hambleden, 1868-1928) took over the business. The wholesale business continued to expand, and in order to reduce the dependence on railway contracts the business started to open retail shops, beginning in Clacton-on-Sea in 1901. The loss of major railway bookstall contracts in 1905 led to a rapid expansion of retail shops. The Edwardian period also saw the printing works develop into a design studio, and the business adopted a typeface by Eric Gill and a logo by R.P. Gossop. The bookbinding business also grew rapidly and some printing and publishing businesses were purchased. In 1915, the head office was relocated to Portugal Street, London.

On the death of the Second Viscount Hambleden in 1928, his son, the third W.H. Smith (1903-1948), inherited the business. In 1929, the partnership became a private limited liability company, W.H. Smith & Son Limited, with the Smith family maintaining a controlling interest. On the death of the third W.H. Smith in 1948, his brother David Smith (1907-1976) took over. The company went public and was listed on the stock exchange, with many staff buying shares. Direct leadership of the business by the Smith family ended with David Smith’s retirement in 1972, and Julian Smith’s retirement in 1992 marked the end of family involvement in executive management. The retirement of Sir Simon Hornby as Chairman in 1994 ended the Hornby family’s 100-year involvement with the business.

In 1966, W.H. Smith’s created a standard book number consisting of a nine-digit code, which was adopted in 1970 as the international standard number and finally became the International Standard Book Number (ISBN) in 1974.

From the 1970s onwards, the company diversified into several areas, starting with WHSmith Travel, which operated from 1973 to 1991. In 1979, it acquired the Do It All chain of DIY stores, later merging with Payless DIY (owned by Boots); in 1996, Smith’s sold its shares in the business back to Boots. In 1986, Smith’s went on to purchase a 75% share in Our Price music stores, and in 1992, bought the Virgin Group’s smaller music stores (all were sold back to Virgin in 1998).  In 1982, the company bought a minority stake in ITV which led them to found several cable channels and create a WHSmith TV division within the company; these channels were later closed or merged with other companies due to increased competition.

From 1989 to 1998, the company was a major shareholder in the Waterstones bookshops, founded by former Smith’s manager Tim Waterstone. The existing W.H. Smith’s bookshop brand Sherratt and Hughes (which had already subsumed Bowes & Bowes) was merged into Waterstones. Printing operations ceased in 1987, but the company once again expanded into publishing from 1999 to 2004 with Hodder Headline.

International ventures included retail branches in Paris (from 1903) and Brussels (1920-1997). From the 1950s until the late 1980s, W.H. Smith’s operated bookshops in Canada, and in the 1990s, it expanded into the USA and in international airports: these were all closed by 2003. During the 1970s, the company operated the Sims chain in the Netherlands in partnership with Elsevier. Smith’s also operated some retail outlets in Australia and New Zealand from 2001 to 2004 and in Australian airports from 2011.

In 1976, W.H. Smith’s moved their head office from its original location in Portugal Street, London to Fetter Lane, London; several other head office relocations within London followed, but from 1967 onwards, many administrative departments began to move out of the capital to the distribution centre at Swindon. In 1998, the company acquired John Menzies retail outlets, which was their main competition at the time: this led to an expansion of shops throughout Scotland. In 2006, the company demerged the two main sides of it business into two distinct entities, WHSmith PLC, becoming the retail side of the business, and SmithNews PLC, covering the newspaper distribution side.

The W.H. Smith business archive covers the period 1773 to 1996 and contains records that cover all aspects of the company’s work.

The administrative records include correspondence, meeting minutes, policy reports, legal advice, deeds and leases, accounts, and miscellaneous business documents. There are also business diaries from W.H. Smith II dating from the mid- to late-19th century, partners dated 1888 to 1909, and Peter W. Bennett dated 1972-1981.  The collection includes plans and maps that relate primarily to W.H. Smith premises, with a number of plans by architects Tubbs, Messer & Poulter.

There is a large amount of photographs within the collection as well. There are photo albums of past employees, company outings, and various W.H. Smith shops, manufacturing premises, and other properties. There are also photographs of staff, employee groups, events, shops and stalls, wholesale houses, specialist stores, and various buildings. There are some negatives of W.H. Smith stores, product displays, and portraits.

There are many items scattered throughout the collection relating to W.H. Smith staff. These records include service sheets from 1854-1938, employee medical checks from 1892-1938, some taped reminiscences from old staff, and annual staff census records from 1944 and 1952-1956.

Please note that the following class of records are subject to CLOSURE periods:

If you have any questions regarding the closure periods, please contact us for more information.

The library collection contains around 100 books and 20 periodical titles, detailing the history of W.H. Smith and material related to bookselling, including guidance for managers on how to run their shops and literature on window dressing.

The collection also includes rare runs of internal publications, such as Newsboy, Newslink and Newsbasket. Some of these periodical titles are indexed on the archive catalogue.

These items were the office copies of W.H. Smith staff.

This collection can be searched on our online catalogue.