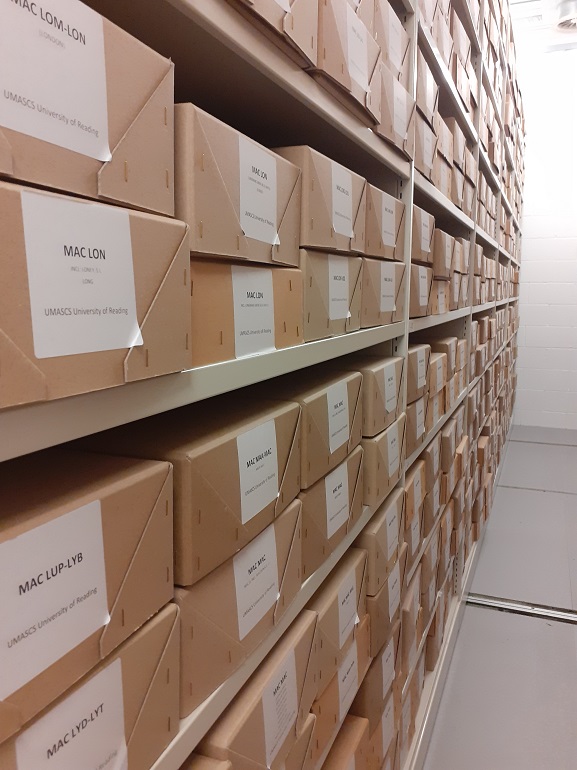 The publishing firm Macmillan was founded by brothers Alexander and Daniel Macmillan in 1843. The Macmillan brothers grew up in a poor farming family on the western coast of Scotland. Daniel apprenticed with a bookseller when he was just 10 years old, which was the start of his lifelong career in the industry. Alexander did not share his older brother’s enthusiasm for the trade at first but became a bookseller’s assistant as well in 1839.

In 1843, Daniel and Alexander opened their first shop in London at 57 Aldersgate Street, but then moved their business to 17 Trinity Street, Cambridge a few months later. They began by selling books but soon got into publishing as well. Just three years after moving to Cambridge, the Macmillans’ business had grown, and they relocated to 1 Trinity Street, Cambridge, the location of one of the oldest continually inhabited bookshops in Britain. At first, the publishing side of the business was slow, as both brothers took a cautious approach when choosing works, but it eventually picked up and became enormously profitable. In 1850, the business was officially named Macmillan & Co.

After Daniel passed away in 1857, Alexander followed his late brother’s advice and opened a second office in London at 23 Henrietta Street, though he kept the main headquarters in Cambridge until 1863. Macmillan & Co. published many major figures in 19th century English literature, including Charles Kingsley, Lewis Carroll, Alfred Tennyson, Herbert Spencer, Thomas Hardy and Rudyard Kipling. Macmillan also created the journal Nature, the Grove Dictionary of Music and Musicians and Palgrave’s Dictionary of Political Economy.

In 1869, George Edward Brett, a London bookseller, sailed to New York to open up an American branch for Macmillan & Co. Originally planned merely as a distribution agency, the American branch began publishing its own books in 1886.  The Macmillan Company of New York was owned by Macmillan & Co. Ltd London until 1951.  Up until then they acted independently but had a reciprocal agreement to publish one another’s books. The Macmillan Company of New York became fully independent in 1951 when it was sold.  In 1952 Macmillan & Co. Ltd then formed a new company (St Martin’s Press) in the USA, with offices in the Flat Iron building.

In the 1870s, Alexander began relinquishing control of the firm to his and Daniel’s sons. Sir Frederick Orridge Macmillan (1851-1936), Daniel’s eldest son, supervised general business matters, American ties, and the genres of fiction, poetry and art. Maurice Crawford Macmillan (1853-1936), Daniel’s second son, presided over the business dealings in India, other foreign expansion, and the genres of education and the classics. George Austin Macmillan (1855-1936), Alexander’s son, was in charge of Greek literature, archaeology and music. However, they developed a smooth and efficient working relationship, and their boundaries of responsibilities were fluid.

When Alexander Macmillan died in 1896, the firm became a limited company, with Frederick as its first Chairman. In 1897, Macmillan & Co. Ltd. took over a new, specially-designed building on St. Martin’s Street, between Leicester Square and the National Gallery. One year later, the firm purchased Richard Bentley & Son, a flourishing publishing business whose proprietor wished to retire. This purchase brought many new authors and titles to the Macmillan list.

After the turn of the 20th century, the next generation of Macmillan’s began to enter the family business. In 1911, William Edward Frank Macmillan (1880-1954), George’s son, and Daniel De Mendi Macmillan (1886-1965), Maurice’s son, joined the board. Daniel went on to serve as chairman from 1936 to 1965. Maurice’s other son, Harold Macmillan (1894-1986) entered the firm in 1920 as a director, and was elected a member of parliament in 1924.  He divided his time between publishing and politics, serving in Churchill’s war cabinet from 1940 to 1945, in Conservative administrations from 1951 to 1957, then as Prime Minister until 1963. He then returned to publishing, and succeeded his brother as chairman in 1965, presiding over the company’s expansion world-wide.  He became Earl of Stockton in 1984.

To commemorate its centenary in 1943, Macmillan & Co. commissioned a history, The House of Macmillan, by Charles Morgan.

In 1965, the firm moved its editorial offices from St Martin’s St to Little Essex Street, just off the Strand, later augmented by additional quarters in nearby Stockton House. The company’s supply, distribution, accounting and archival facilities were moved to Basingstoke. Harold and his son Maurice Macmillan (1921-1984) alternated as Chairman up until Maurice’s death in 1984. Harold’s grandson, Alexander Macmillan, Earl of Stockton (b.1943) became chairman in 1985. In 1990 Nicholas Byam Shaw took over from him as Chairman and Alexander became President of the company.

In 1995, Holtzbrinck, a Germany-based publishing group, bought 70% of Macmillan Publishers Ltd. and the remainder in 1999.

The archives of Macmillan and Company Ltd are shared with the British Library Department of Manuscripts.

The collection held by Special Collections consists chiefly of around 60,000 incoming letters, covering the period 1875 to 1967, which remained after the correspondence from the more significant authors were removed to the British Library.  However, the sorting process was not exhaustive, and letters from well-known writers such as Hilaire Belloc, Rudyard Kipling and W.B. Yeats remain with the Reading collection. The letters are arranged in alphabetical order by the senders’ surname.

Early cashbooks and catalogues of books from when Macmillan were based in Cambridge at Trinity Street can be found in the Bowes & Bowes Archive.

More recent archive material is still held by the company itself and enquiries about this material and information on the history of the company can be directed to archive.department@macmillan.co.uk