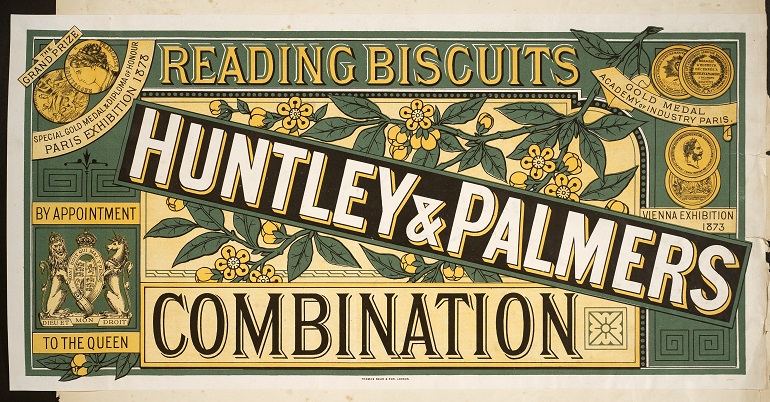 Huntley & Palmers started life in 1822 as a small bakery in Reading. Joseph Huntley, a Quaker schoolmaster from Oxfordshire, established his business on London Road. After 1829, his son Thomas became a partner, and the firm was known as Joseph Huntley & Son. On the retirement of his father in 1838, Thomas Huntley operated alone and under his own name, and then in 1841, went into partnership with fellow Quaker George Palmer, later MP for Reading, as Huntley & Palmer.

In 1846, the firm opened a large factory on Kings Road in Reading. Palmer had begun to transform the business, developing the first continuously running machine for making fancy biscuits and setting up a properly organised factory. In 1857, George Palmer and his brothers, William, Isaac and Samuel, bought out the Huntley interest but retained the company name. Other members of the Palmer family became partners, and by the end of the nineteenth century, the firm, now called Huntley & Palmers, was the largest biscuit business in the world, employed more than 5,000 workers, and was among the forty most important industrial companies in Britain.

Huntley and Palmers cakes and biscuits were a household name, and the distinctive tins, made by the firm Huntley, Boorne and Stevens (founded by another member of the Huntley family) were recognised worldwide. In 1898, after George Palmer’s death, the private company Huntley & Palmers Ltd was established. In 1921, the company combined with the firm of Peek Frean, each becoming subsidiary units of the Associated Biscuit Manufacturers Ltd. The Liverpool firm of W. & R. Jacob & Co. joined the group in 1960.

In the late 1960s, re-organisation took place, and from 1969, the three units disappeared as independent trading entities and were replaced by the division known as Associated Biscuits Ltd. Huntley & Palmers’ Reading factory was finally closed down in 1972. In 1982, Nabisco, an American multi-national company, bought out Associated Biscuits Ltd. The company was renamed Jacob’s Bakery Ltd in 1989 and acquired by BSN (Boussois Souchon-Neuvesel), which changed its name to Danone in 1994.

The archives cover the period 1837-1995. The bulk of the collection concerns the business of the firm, in all its aspects. Financial and general management records include accounts; wages records, register of members and shares; private family accounts. Minute books include those of the Executive Committee of Directors 1922-1948; of the Board of Directors 1898-1951; of the Reading Biscuit Factory Committee of Management 1917-1946. Legal papers include registers of deeds of property; contracts; deeds of association relating to the relationship with Peek Frean and with Associated Biscuit Manufacturers; patents, and trademarks.

Business correspondence includes letters of the Palmers and other senior managers, c1850-1983. Promotional material includes catalogues, records of displays and correspondence about Huntley and Palmers’ exhibits at various international fairs; advertising booklets, leaflets and catalogues; sets of advertising cards with various themes; newspaper and other advertisements and press cuttings. There are specimens of different types of packaging and some original artwork for packaging and promotional material.

Production records include records of the purchase of raw materials; recipes; productivity figures; records of wedding cakes made 1877-1921; and plant and machinery records. Sales records cover both home and export sales from the 1850s onwards and include price lists; order books; trade comparisons and analyses.

There are records of Huntley and Palmers’ various social clubs. Published material includes newspaper and journal articles c1900-1995 about the firm, the Palmer family, the British biscuit industry and the collector’s interest in biscuit tins.

There are photographs c1872-1980, depicting various subjects including groups of employees, members of the Palmer family, VIP visits, exhibits at trade fairs and Huntley and Palmers’ buildings. Album subjects include celebration cakes and international exhibitions 1929-1954; presentations of sports and long service awards 1918-1954, and the visit of the Queen Mother to the factory in 1955.

Other items of note include material relating to Huntley and Palmers supplies taken on the British Antarctic expeditions of 1911-1912; visitors books for the factory 1869-1973; papers concerning the royal warrants granted to Huntley and Palmers as suppliers to the courts of Europe; albums of corporate stationery 1883-1911; a ledger recording the journeys of the firm’s continental travellers 1887-1903, and particulars of army biscuits supplied to the War Office, August 1914.

There are various personal papers of the Palmer family c1860-1951, including personal correspondence; papers of George Palmer about his work as an MP; obituaries; visiting cards; a family tree tracing the Huntleys and Palmers back to the early seventeenth century; and wills, baptism and marriage certificates. Some of the personal papers show the relationship between the family and the firm, such as notices of congratulation sent on behalf of the employees to various Palmers when they got married.

Peek Frean was founded in 1857 by James Peek and George Hender Frean. The company merged with Huntley & Palmers and other biscuit manufacturers in 1969 to become Associated Biscuit Manufacturers Ltd.

The extensive archives cover the period 1831-1957, and include price lists, photographs, letter books, lists of employees, illustrations for tins, stock books, balance sheets, designs for labels, correspondence with Huntley & Palmers, and even an obituary list of staff 1893-1928.