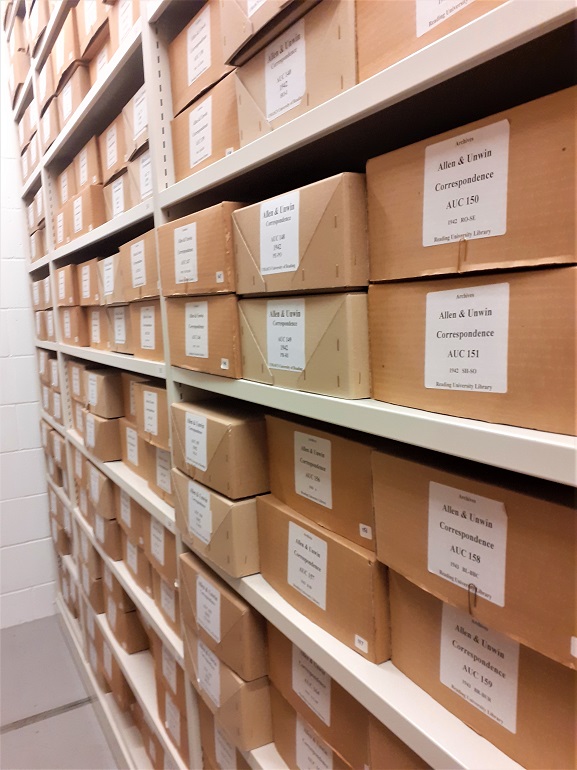 The firm of George Allen & Sons began in 1871 by George Allen, an associate of and publisher for John Ruskin. The company acquired the publishing branch of Bemrose & Sons in 1909, and in 1911, it merged with Swan Sonnenschein to form George Allen & Co. Ltd. Financial difficulties ensued under George Allen’s succeeding sons and daughter, and a Receiver for the Debenture Holders was appointed on 2 January 1914.

Stanley Unwin, who had previously worked for his uncle’s publishing firm T. Fisher Unwin, acquired an interest, and the firm of George Allen & Unwin Ltd was formally registered on 4 August 1914. The following month, the company moved from Rathbone Place to 40 Museum Street in London. There were four original directors: Stanley Unwin, who controlled all trade matters; Colonel Philip Hugh Dalbiac, who took care of the authors’ accounts; Cecil A. Reynolds, who acted as secretary; and Edgar L. Skinner, who managed the advertising. In practice, most of the work of running the business fell into Unwin’s hands, partly because the other three directors were required to perform war work elsewhere. By 1934, he had full control of the business, which he retained until his death in 1968.

Unwin was a Nonconformist and a liberal thinker, and his views were often reflected in the books published by the firm, such as works by Bertrand Russell, J.A. Hobson, L.T. Hobhouse and Ramsay MacDonald. He was keen to introduce foreign works to English readers and published many translations throughout his career. Allen & Unwin also published books about India and by Indian authors from the 1920s onwards, helping to increase understanding of Indian affairs.

In 1928, Unwin purchased the firm of Williams & Norgate, which was then sold to his remaining co-director, E.L. Skinner, as part of the deal which saw Skinner’s departure from the firm in 1934. Other acquisitions were the Dublin firm of Maunsell, publisher of the playwright J.M. Synge, and a controlling interest in the Bodley Head, shared with competitors Jonathan Cape and J.M. Dent and finally sold in 1957.

The firm survived both wartime paper rationing and the destruction of 1.4 million books in a bombing raid, and towards the end of the war, purchased the assets of Elkin Mathews & Marrot, previously noted for belles-lettres, and Thomas Murby & Co., the leading geological publisher. Notable post-war successes included The Kon-Tiki Expedition (1950) and The Lord of the Rings (1954-5).

In 1986, Allen & Unwin merged with Bell & Hyman, forming the company Unwin Hyman, which was then purchased by HarperCollins in July 1990. HarperCollins sold the Unwin Hyman academic division to Thomson Books’ Routledge division. Routledge was subsequently acquired by the Taylor & Francis Group. Allen & Unwin is still an independent publishing firm in Australia and New Zealand.

In addition, there are some records from associated or subsidiary companies. Material from George Allen & Co. consists of production and promotion records 1904-1914; authors’ accounts 1904-1914; directors’ minutes 1911-1914; expenditure ledgers 1911-1913; and the register of members 1911-1913. Swan Sonnenschein material includes directors’ minutes 1895-1909 and accounts 1884-1903. There are also some files from the firm of Elkin Mathews & Marrot, acquired in 1941. These consist of correspondence, agreements and copyright permissions, chiefly dating from the 1930s. Material from Bemrose & Sons includes a publishing ledger covering the period 1887-1894 and agreements and stock records 1908-1909 relating to the sale of the business to George Allen. Other companies are represented only by one or two documents. These include Headley Bros Ltd, Museum Street Buildings Ltd, Educational Bulletins Ltd, John Lane, The Bodley Head Ltd, W.J. Bryce Ltd, Messers Unwin Brothers Ltd, Williams & Norgate Ltd, Book Centre Ltd, and Thomas Murby & Co.