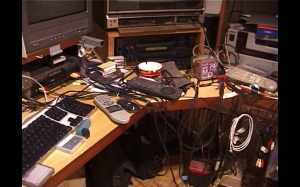 Stephen Dwoskin, (1939-2012) was an experimental filmmaker.   According to the British Film Institute (BFI) website, “Dwoskin was an avant-garde filmmaker in the truest sense – boundaries are not clearly defined in his films, which can often be uncomfortable to watch. Works such as Chinese Checkers (1965), Dyn Amo (1972) and Central Bazaar (1976) explore sexuality, disability and the primacy of the image…”

Stephen Dwoskin’s career initially began in graphic art, studying at New York University under influential artists Joseph Albers and Professor Willem de Kooning. He went on to work as an acclaimed graphic designer and art director for CBS and Epic Records.  He made a point of not distinguishing between types of art, however, and alongside his work in design, he discovered a passion for experimental cinema inspired by Maya Deren’s films and the transgressive underground works of Jack Smith and Ron Rice which would last him a lifetime.

After making his first few shorts in the early 1960s, he was awarded a Fulbright Fellowship for design research in the UK and relocated to London in 1964, where he sought out other filmmakers and quickly established himself as a leading figure in the independent filmmaking community. He co-founded the London Filmmakers’ Co-operative in October 1966, now known as the LUX, and won the Solvay Prize at the 4th International Experimental Film Festival in Belgium for his 1964 films, Naissant and Soliloquy. From the 1970s right up to his death in 2012 he produced a number of avant-garde feature films, including Central Bazaar (1976), The Silent Cry (1977) and Tod und Teufel (1973), establishing himself as someone who approached film with a unique perspective and applied his own distinctive style to his creations.

Dwoskin often encouraged those he was filming to engage with the camera, focusing on themes of people, faces, masculinity, sexuality, and disability, among others. The theme of disability, alongside an ongoing examination of the experience of pain and pleasure, was of particular interest to Dwoskin. He had to use crutches, and later, a wheelchair, from the age of nine, after he contracted Polio. Behindert was the first of his films to address his disability directly, examining Dwoskin’s relationship with an able-bodied woman, and later films, such as Intoxicated By My Illness, reflected on a period of his life in intensive care. Despite ongoing periods of poor health, he continued to make films up until he passed away in June 2012, with his final film Age Is… which premiered after his death at the Locarno Film Festival and premiered in the UK at the Tate Modern.

The University of Reading acknowledges with thanks the donation to it by Paul Venezia of the collection of papers comprising The Stephen Dwoskin Archive.

An interdisciplinary research project ‘The Legacies of Stephen Dwoskin’s Personal Cinema’ has helped to preserve and promote the material in the archive. Led by Professor Rachel Garfield (Reading School of Art) in partnership with the LUX and the BFI and the Universities of Sheffield and Glasgow, and funded by the AHRC, the project began 2018.  Further information may be found on the Dwoskin Project website

This collection covers all aspects of film-making and documents Dwoskin’s immersion in his work, from initial concept through the creative process to promotion and marketing. The collection holds material relating to Dwoskin’s film and writing projects, including unpublished writing; papers relating to his graphics and artwork; business and personal papers including correspondence; photographic material; posters; audio and film footage and 20 hard disc drives plus associated disc images and extracted digital files.