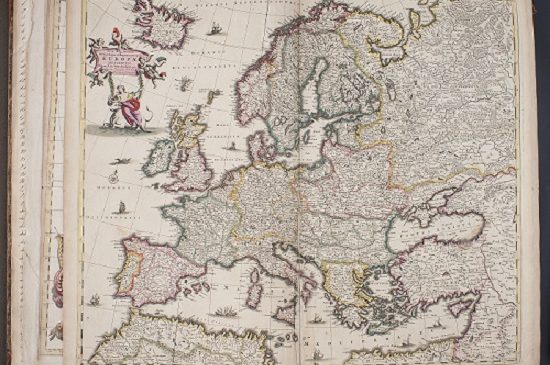 In seventeenth-century Europe, no library would be considered complete without a pair of globes and the provision of up-to-date maps and atlases as a source of information on new discoveries, and at the University of Reading we are lucky to have not only a large map collection at the University Library, but also a number of early maps and atlases.

Perhaps the finest of these is a copy of Frederick de Wit’s Atlas, produced between about 1670 and 1707, and this beautiful volume is the subject of a new Featured Item on the Special Collections website.

De Wit was a prolific and skilled map engraver, publisher and seller who became one of the largest publishers in Amsterdam by the end of the seventeenth century. De Wit’s Atlas is one of a series of world atlases compiled by De Wit in numerous editions. Copies of the Atlas are held in a number of map and special collections libraries and private collections, and vary in content from 17 to 190 finely coloured maps.

As with many Dutch maps of the period, the maps in De Wit’s volume feature many elaborate and beautifully coloured decorative features, including illustrations of exotic beasts and even a winged sea monster.

The volume contains a number of maps by De Wit himself, together with maps by other important map-makers of the period including Nicholas Visscher I, Abraham Ortelius and Joan Blaeu, printed by De Wit from plates that he had acquired.

The Atlas is available to view at the Special Collections reading room on request.