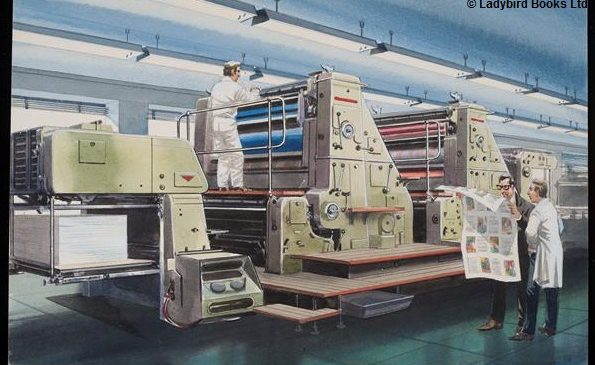 How do you catalogue an artwork? That is the question I’ve been trying to solve over the last few days. Usually the answer would be simple…it would be added to the Art Collection area of the University of Reading’s Collections Management System (CMS). Complicating the matter, however, is the fact that this artwork is not just a ‘normal’ painting instead it is part of the Ladybird Artwork Archive which includes 700 boxes of original art used to illustrate hundreds of books.

Individually painted and beautifully detailed, by commercial artists who specialised in different styles, these artworks were instrumental in depicting the clear message of the Ladybird books and partially the reason for their continued popularity. Ironically the familiar pocket-sized books only started to be produced around 25 years after Wills & Hepworth first started printing the inexpensive Ladybird books in 1914 in runs between their main commercial jobs. It was also by necessity rather than design, with paper shortages during the Second World War creating a rethink in the formatting which allowed a book of 56 pages to be printed on a single sheet of 40 by 30 inch paper.

Covering a huge variety of subjects with educational and informative content, Ladybird books offered young readers the opportunity to pursue knowledge themselves. Ladybird capitalised on their user-friendly layout with full page illustrations to develop literary, publishing both the Key Words Reading Scheme and Learning to Read series, which were often used to teach children how to read in the 1950s to 1970s.

Adding to the complexity involved in cataloguing this artwork, Ladybird did not reproduce new versions of the art required for updated publications instead the original paintings would either be reused or if necessary be carefully modified. This means that a single work could have appeared in several different versions of a book which can create problems in hierarchies used by Archives. The method of revising paintings can be seen in this print from Exploring Space where a close-up shows an earlier outline of the lunar module from before the 1969 Moon landing.

Held by the University of Reading on behalf of Penguin Random House, the Ladybird Artwork Archive has actually been catalogued previously…but only to box level. This gives us a really good overview of what is held in the collection but we now want to delve deeper to record individual works.

So why catalogue them now? With the redevelopment of the Museum of English Rural Life, a space to display some of this artwork has been created so we are now able to share objects from this amazing archive. Several prints from this collection have also been sent to other museums and galleries on loan to temporary exhibitions. This means that we have needed to record more information about the original artworks as they have been sent out, but this has been as needed and it makes sense to us that we catalogue the entire collection. With each work being recorded, links will need to be made to the original book and any revised editions, as well as to the different publication series.

Considering that each box holds anywhere from 20 to 50 items it’s a lot of catalogue so I want to make sure that I get it right first time. Which leads me right back to my original dilemma … Object or Archive?