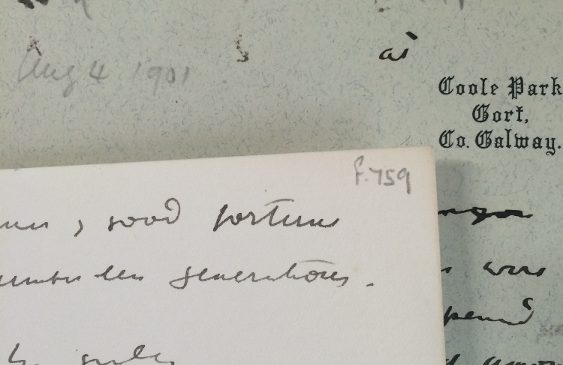 This Saturday 13th June is the 150th Anniversary of the birth of William Butler Yeats, with events taking place across the UK, Ireland and beyond. Here at Special Collections we thought we’d get out a few of our Yeats’ treasures and David, our Graduate Trainee Library Assistant, has written a piece introducing the man himself.

WB Yeats was one of the most significant poets of the twentieth century. His work has influenced many other authors and some of his most famous lines have been used as titles themselves, from Chinua Achebe’s Things Fall Apartto Cormac McCarthy’s No Country for Old Men. Born in 1865 in Dublin to a prominent Anglo-Irish family, his father, John Butler Yeats was a portrait painter, and his younger brother Jack is also best known as a painter today. As a young man he studied at the Dublin Metropolitan School of Art and it was during this time that he began to write poetry. After finishing his studies he committed to literature as a profession rather than art. A friendship with George William Russell led Yeats to become interested in mysticism and the occult and he joined the recently established Hermetic Order of the Golden Dawn in 1890. In the same year Yeats himself co-founded the Rhymers’ Club with Ernest Rhys which was primarily a dining club in London but also produced two books of poetry. Another formative experience was Yeats’ collaboration with Edwin Ellis on the first complete edition of the works of William Blake published in 1893. Special Collections holds the Ellis Collection which includes manuscripts of the work.

In the first half of his life, Yeats’ poetry was dominated by traditional Irish themes and inspired by his obsession with Maud Gonne, a fierce campaigner for Irish independence. Yeats proposed to her in 1891, 1899, 1900 and 1901 but she eventually married the republican Major John MacBride. His other major concern in this period was the development of the Irish Literary Society in London and the National Literary Society in Dublin, both founded in 1892. The following year, The Celtic Twilight was published, a collection of folk tales and stories that he had heard in Sligo and Galway which gave the movement another name, the Celtic Revival. This culminated in 1899 with the opening of the Irish Literary Theatre in Dublin, where the first production was Yeats’ The Countess Cathleen dedicated to Gonne. However the use of English actors was unpopular and the project was superseded by the Irish National Theatre Society and the creation of the Abbey Theatre in 1904. This time the even more nationalistic Cathleen Ní Houlihan about the 1798 Rebellion was performed. Yeats’ sisters, Elizabeth and Lily, were also involved in the revival by founding the Dun Emer Press in 1902 which eventually became the Cuala Press; many titles of the Press’s books can be found in Special Collections.

The year 1916 can be seen as a turning point in Yeats’ personal life and literature. His friendship with Ezra Pound had introduced him to Japanese Noh plays and At the Hawk’s Well was Yeats’ first play in this style. Gonne’s husband MacBride was executed for his role in the Easter Rising of 1916 and Yeats proposed to Maud one last time while his poem Easter, 1916 reflected his ambiguous feelings towards the violence and heroism of the republicans. Yeats finally married in 1917, not to Maud (or even her daughter Iseult, who he proposed to as well) but to Georgie Hyde-Lees, 27 years his junior. The marriage was a success and Georgie’s interest in psychic automatic writing led to Yeats’ major work on the occult, A Vision in 1925. Yeats’ later poetry, while still influenced by mysticism and symbolism, became increasingly modernist and reflective in some of his most famous works such as The Second Comingand Sailing to Byzantium. By the 1920s Yeats’ had been internationally recognised with the Nobel Prize in Literature in 1923 and had become politically active. He was an Irish senator from 1922 to 1928 where he argued passionately against making divorce illegal and was Chairman of the Commission on Coinage. Yeats’ last major editorial work was The Oxford Book of Modern Verse, 1892-1935 and he died in 1939.