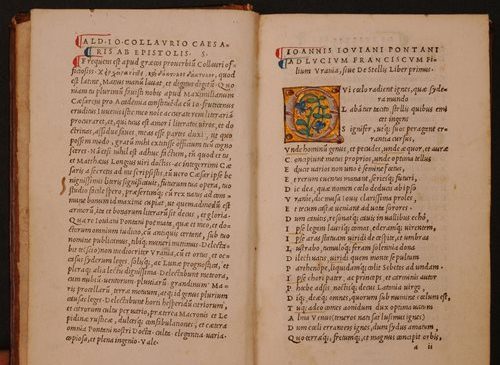 The year 2015 marks the 500th anniversary of the death of Aldus Manutius (c. 1451-1515), one of the most influential figures among the early Venetian printers. Our new exhibition features some examples of his publications from the University of Reading rare book collections, together with works by his son, Paulus Manutius, and some of Aldus’s contemporaries who were working during his lifetime and afterwards.

At the turn of the fifteenth century, Venice was at the centre of the book market, with about 150 presses at work in the city. Aldus established a reputation as one of the finest printers of the period, producing quality, compact and affordable editions of classical and contemporary texts for the growing market of humanist scholars. Aldus is known for his development of an italic type, cut by Francesco Griffo. The condensed size of this type, which was based on the humanist script, enabled Aldus to create compact editions which were popular with scholars for their portability.

One of the highlights of the exhibition is an illuminated edition of the works of Giovanni Gioviano Pontano (1426–1503) [see image below], the celebrated Italian humanist and Latin poet, published in 1505 and an example of one of Aldus’s compact publications, printed in the italic type designed by Francesco Griffo. 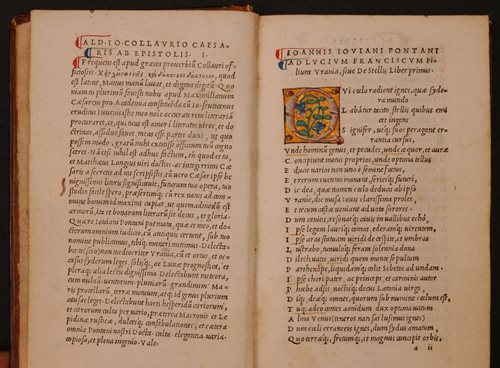 The exhibits also include a facsimile reprint of Hypnerotomachia Poliphili, a romantic allegory, which was published by Aldus in 1499. Illustrated by an unknown artist, the book has been described as “the most beautiful woodcut book ever published”. The use of illustrations in printed books was a relatively new development at this time. This work is also notable for the way in which the content of the illustrations closely follows the storyline of the allegory.

This early Venetian printing exhibition will be on display in the staircase hall at the Special Collections Service until 27 March 2015.